More Episcopal Help in Germany With the Immemorial Mass

The 14th Cologne Liturgical Event was a giant success. Today the Abbot of Mariawald celebrated a High Mass. 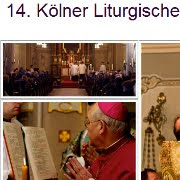 (kreuz.net)On Thursday Bishop Czeslaw Kozon (59) of Coppenhagan celebrated a Pontifical High Mass in the Old Rite at the Parish of St. Gertrud in Herzogenrath.

This was picked up by the 'Aachener Zeitung'.

The occasion for the Pontifical Mass was the 'Cologne Liturgical Event' running since last Thursday till today.

The population 50.000 city of Herzogenrath is located in the vicinity of Aachen.

The pastor of St. Gertrud is Fr. Guido Rodheudt.

He is a speaker for the German 'Priesternetzwerks' and coordinator for the event.

The second highpoint is again another Traditional High Mass.

Present at the Congress were about a hundred priests, deacons and laity from Germany as well as the Netherlands, France and other countries.

The theme of the event read: "Reality -- Really -- Essential. The presence of Christ in the Most Holy Sacrament of the Altar and its entitlement in liturgical forms."

The Congress was organized by various Catholic organizations.

-the "Network of Catholic Priests'

As the second high point of the event the 'Aachener Zeitung' described a High Mass in the Old Rite, that will be celebrated by Abbot Josef Vollberg of the Trappist Cloister of Mariawald.

After the Mass there was a matinee with the theme "the Cathedral in the in the nutshell: the Missal of Trent" in the parish center.

The German writer, Martin Mosebach was there.