Guardian Gloats Over the End of Confessional Ireland

Editor: the Guardian would never enable elements hostile to Catholicism, would it? The Irish Republic continues to dismantled and put away the remnants of an Irish confessional state with the blessing of a people saturated with media hysteria. 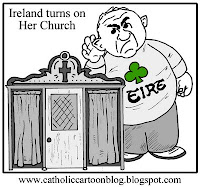 [Guardian] There are two parallel revolutions taking place on either side of the Irish Sea that will radically alter the relationship between government and non-state institutions that exercise major temporal power.

In Britain the ongoing revelations of wrongdoing within the Murdoch empire and the public humiliation of a media baron and his son may result in re-alignment in the relationship between politicians and the press, with the former becoming less supplicant to the latter.

One of the most important by-products of the last few incredible weeks has been the end of fear. Specifically, fear of media tycoons who used to boast that some of their newspapers had "won" elections and had left the prime ministerial ambitions of party leaders in ruins. The humbling of Murdoch Senior and Junior this week marked the end of that fear.

Catholic Cartoon blog, here.
Posted by Tancred at 4:38 AM