Will Anyone Under Sixty be At the Rainbow Sash Protest "Surrounding" St. Paul Cathedral Tomorrow? 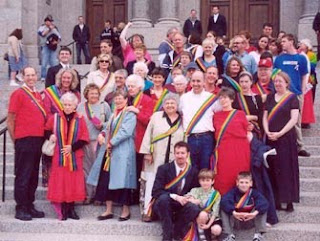 This photo was taken a few years ago and some of the people have aged. Let's see what this year's vital movement to make sexual deviance a priority in the lives of Catholics brings in terms of age distribution and raw numbers, and it's fitting that many are celebrating "Reformation Sunday".

They'll be there at 1130 am in time to disrupt the twelve o'clock Mass.

They are most likely angry about the DVD campaign. It's very possible that no one will show up, but just in case, Archbishop Nienstedt is unlikely to give them Holy Communion since he refused to do so when he was at St. John's Abbey at Collegeville and confronted by the same kinds of people.

It's all related in a sense, because not only is it Halloween, a favored day for satanists and homosexuals, but it's also campaign season:

Pro-Homosexual Artist doesn't have enough DVDs for her "Art"

Pastor of Purple Basilica Put in Charge of Parish Reorganization
Posted by Tancred at 12:52 PM