Discontent with Pope's Visit to England from "many" Anglicans

Surely, Scotland's Bishops aren't too happy about hosting Benedict. They're too busy doing everything but ensuring that their sheep know the Catholic Faith. Just what is it that they are enthused about besides banal liturgy and uninspiring leadership? Even the Anglicans aren't that hostile and Sky News is at a loss to drum up the kind of hostility John Paul II experienced from the Church of Scotland in 1982.

Are there really Anglicans who have taken the time out of their days being discontented with the Pope's visit? We don't think so.

There is discontent in some parts [Please name them] of the Anglican Church about Pope Benedict XVI’s visit later this year.

Many see the Pope as exploiting the invitation as an opportunity to sleight the history of the Church of England, which split from Rome in the 16th century.

Perhaps this would be the most sensible action of the Pope, at a time when the Church of England seems to be in difficulty. Last year, Benedict coaxed discontented Anglicans to quit and come over to his Roman Catholic denomination, which was regarded by some to be rude, at worse, and impolite, at best.

In 1982 some members of the Church of Scotland’s General Assembly railed against John Paul as the “Anti-Christ”. Will there be demonstrations at the gates of Balmoral in September?

Nor is there likely to be much protest from Anglicans, who will probably be prayerful; just as the Archbishop of Canterbury always seems to be – no matter what happens.

Read the entire article...
Posted by Tancred at 1:05 PM No comments:


The strongest supporters of Canada's constitutional monarchy are urging Prime Minister Stephen Harper and other Commonwealth leaders to "modernize" the centuries-old rules of succession that bar Catholics from the throne.

British Prime Minister Gordon Brown is expected to informally discuss possible reforms to the 1701 Act of Settlement with fellow Commonwealth leaders during their summit in Trinidad.

Robert Finch, chairman of the Monarchist League of Canada, said that such reforms would mean that those pushing for this country to become a republic would "no longer be able to claim the monarchy discriminates against Catholics."

He said: "The queen has no official religious role whatsoever in Canada, so it really shouldn't be an issue to allow Catholics to become king or queen of Canada."

The succession issue is a long-standing source of objections from many Catholics and critics of the monarchy in both Canada and Britain. A British MP's bill to rewrite provisions of the 1701 act was scuttled this year by the government -- but with assurances from Brown that reforms would be considered after discussions with other Commonwealth countries.

Link to original...
Posted by Tancred at 5:53 PM No comments:

The Queen a Parasite? No, a penny pinching paragon.

This morning, we will see the great, unwritten British constitution on display in all its glory — the Sovereign in her Crown and on her Throne, opening her democratically -elected Parliament.

At the same time, a promising political career lies in ruins for mocking it.

Until yesterday, Peter White was a young Labour activist seeking the first rung on the political ladder.

A former chairman of London Young Labour and former aide to a Labour Minister, he is a prospective candidate for Havering Council in East London.
Today, though, at 26, he finds himself sitting somewhere between Sir Fred Goodwin and swine flu in the court of public opinion.

Over the weekend, Mr White launched a vituperative personal broadside at the most popular and respected figure in British public life.
The cause of Mr White’s foam-flecked fury was a suggestion that there should be a public holiday for the Queen’s Diamond Jubilee in 2012. 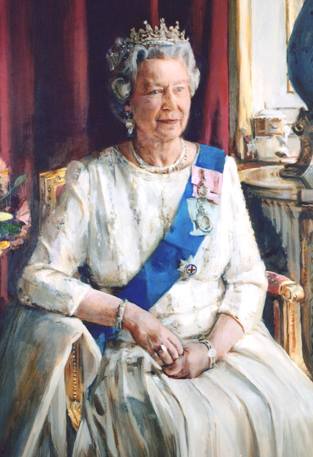 
The Queen generally stays out of political frays, but it's hard not to imagine that the leftists want to belittle her importance to Canada prior to her visit in 2010 for political advantage, so no doubt, there will be those wanting to "dialogue" about her irrelavence to Canada when it's clear from the massive jiggerng of the polls that the majority of Canadians actually do favor the Monarchy and look forward to welcoming her Majesty next year.
Posted by Tancred at 9:42 PM No comments: