Edit: you may control the real-estate, but will you have very many people in the pews with all the abortion, birth-control and homosexuality going on in the ECUSA?

[Virtue Online] After more than a decade of ecclesiastical infighting and lawsuits, a Montgomery County Court Judge delivered the final blow to the Anglo-Catholic rector of the Church of the Good Shepherd in Rosemont, on Monday by saying Fr. David L. Moyer must leave the parish. He also ordered two men to step down from the Vestry.

It is the end of a long and bitter battle waged between the Diocese of Pennsylvania, its Bishop Charles E. Bennison, the Standing Committee and Fr. David L. Moyer (AKA Bishop Moyer of the Traditional Anglican Communion). The latter fought the bishop charging him with heresy and his failure to uphold a flying bishop arrangement for Anglo-Catholics made under his predecessor Bishop Alan Bartlett.

Moyer has instigated and been dogged by multiple lawsuits for nearly a decade.

Link to Virtue Online...
Posted by Tancred at 10:14 PM No comments:

Editor: To mix and match some metaphors, like King Canute,  a tiny band of Bishops are trying to shout against the crashing sea, or to right the sinking ship of the overwhelmingly trendy Anglican Communion in Canada. Isn't this like closing the gate after the cows have escaped? They should put a sign up on the chamber doors as you enter this viper brood,  "abandon all hope ye who enter".


Six conservative bishops have banded together in the hope of influencing the overwhelmingly liberal House of Bishops in the Anglican Church of Canada (ACC). The six have pledged to observe with “gracious restraint” the three-fold moratoria of the Windsor Report.

Although the six have been dubbed “gracious restraint bishops,” there is no official name for their association. Nor is it formally related with a similar American group, Communion Partners.
The group includes three relatively new bishops — the Rt. Revs. Stephen Andrews (Algoma), Michael Hawkins (Saskatchewan) and Fraser Lawton (Athabasca) — and three longtime bishops: William Anderson (Caledonia), Andrew Atagotaaluk (Arctic) and Larry Robertson (Yukon). At the April meeting of the House of Bishops they declared:

“We are pleased to announce the establishment of an association of bishops in the Anglican Church of Canada who are committed to a policy of ‘gracious restraint,’ embodied in observing the three-fold moratoria as enjoined by the Windsor Report. Between ourselves we agree to observe the discipline of the Windsor moratoria until such time as there is clarity in the Communion about the final status of the Anglican Covenant and our mutual obligations.”

Editor: Hopefully, Anglicans who are dissatisfied with this state of affairs will be welcomed heartily, but at least in Canada, we fear they are not.

The blessing of civil marriages between same-sex couples can now take place in the Anglican diocese of Nova Scotia and Prince Edward Island.

A resolution giving priests and parishes the option to bless same-sex unions was approved, by a majority vote, at the 143rd synod of the diocese on May 27 in Halifax.

Parishes and clergy are free to opt out of blessing same-sex unions, the diocesan bishop, Sue Moxley, told Anglican Journal. Interviewed via e-mail, Bishop Moxley added that parishes will need “to decide where they want to be with a pastoral response” on the issue

Still More Hundreds of Anglicans Will be Catholic by Easter

Hallelujah -- More Hundreds of Anglicans Will be Catholic this Easter

Around 20 priests and 600 laity are entering into the newly structured Peronal Ordinariat "Our Lady of Walsingham".

LLondon (kath.net/KAP)In Great Britain, beginning this Ash Wednesday, there are in total 33 large groups of Anglicans which will make the step to cross over to the Catholic Church in Easter.  It is consists of around 20 Priests 600 Laity, which  will enter the newly structured Catholic Personal Ordinariat "Our Lady of Walsingham", according to the Italian Catholic News Agency 'SIR' this Tuesday.  After additional weeks of preparation the converts could receive the Sacrament of Confirmation by Easter Sunday or Holy Thursday in the Catholic Church.  The first priestly ordination for the new Ordinariat should fall on Pentecost.

The Vatican decree of 2009 "Anglicanorum coetibus" made a church structure, created to enable  Anglicans who wanted to come over. They allow the converts the maintenance of a series of Anglican Traditions.  In the middle of January 2011 the first Personal Ordinariat was erected and the earlier Anglican Bishop Keith Newton was named as its leader.  Further Ordinariats could be erected next in the USA, in Canada and Australia, according to Rome.

The Vatican has repeatedly explained that the new structures will not disturb the ecumenical dialog between Catholics and Anglicans.  It does not constitute active wooing away of members of other churches; in any case one wants persons, who for their part, are seeking a new spiritual home.

[AP Texas News] A state district judge has ordered Fort Worth Bishop Jack Iker and a conservative, breakaway group of Episcopalians to surrender all diocesan property to the national church.

The Episcopal Church filed a lawsuit seeking to regain control of church property from the Diocese of Fort Worth in April 2009.

The Iker-led group, which split from the national church over issues including gay clergy and women in the priesthood, voted in 2008 to join a more conservative province of the worldwide Anglican Communion.

The Episcopal Church maintained in the suit that its rules prohibit dioceses from breaking away and that church properties are held in trust for the denomination, and the court ruled in its favor.

The Iker-led group said it will appeal. 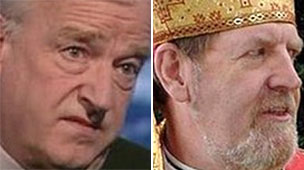 Three former Anglican bishops, unhappy with the ordination of women, have been ordained as Roman Catholic priests at Westminster Cathedral.
Their ordination signals the inauguration of a special section of the Catholic Church for such Anglicans.
Keith Newton, Andrew Burnham and John Broadhurst will take up roles in the section known as the Ordinariate.
Father Newton has been chosen as leader of what is to be known as the Ordinariate of Our Lady of Walsingham.
Posted by Tancred at 7:12 AM No comments:

Creation of New "Traditional" Society Within the Anglican Communion

With the news that there's a new Ordinariate (See article below) in the making, there's no small amount of skepticism in the air, and that is certainly felt in the coming formation of SSWSH (Society of Saint Wilfrid and Saint Hilda. The following coverage of the new establishment, which is meant as a kind of reserveration within the Anglican Communion which will appease the consciences of those Anglicans who:

1) Want to Object to the ordination of women.

2) Favor solemnity in their worship

3) Object to the Dogma of Papal Primacy

4) Don't want to lose their living (stipends) doing any of the above, even if they are inclined to Papal Primacy and Catholicism.

The page at "Thinking Anglicans" takes umbrage at their moral objections on grounds that are obscure, but they insist that one of the Society's namesakes, St. Hilda, was put in charge of men herself, although she couldn't have said Mass. Sorry.

It is important to remember at this point that Damian Thompson is presiding over the funeral of Archbishop Rowan's authority. Whatever you think of it, SSWSH, or Swish!!!, as it's called by some of it's detractors, the conference they've recently held had over 600 priest participants. This is nothing to sneeze at, whatever their motivations, they are at least concerned enough about the future of the Church of England to do something, anything, to maintain their integrity with the slightest amount of personal pain to themselves and their wives and children.

Too bad they abandoned clerical celibacy! It might have made this transition so much easier. In the meantime, the English people are completely disinterested in their established church as membership has declined to 33% according to one survey. Can it be that those who control the land, the churches and schools of the Church of England can be so out of touch to suppose that further accommodating themselves to the spirit of the age, that they will overturn this trend? At least SSWSH seems to understand that much.
Posted by Tancred at 12:53 PM 2 comments: