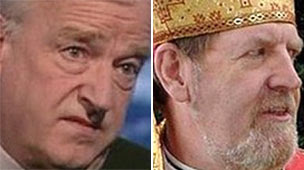 Three former Anglican bishops, unhappy with the ordination of women, have been ordained as Roman Catholic priests at Westminster Cathedral.
Their ordination signals the inauguration of a special section of the Catholic Church for such Anglicans.
Keith Newton, Andrew Burnham and John Broadhurst will take up roles in the section known as the Ordinariate.
Father Newton has been chosen as leader of what is to be known as the Ordinariate of Our Lady of Walsingham.
Posted by Tancred at 7:12 AM