Bishop's Congregation Had the Goods on Dismissed Archbishop From Slovakia

Edit: It looks like Cardinal Ouellette is taking this assignment very seriously, and taking the wolves down to size.  These Bishops are fairly small potatoes.  It will be interesting to see more visible and powerful prelates fall to this kind of treatment.

A Slovakian television broadcaster has published a letter between the Archbishop of Tyrnau and the Bishops Congregation. 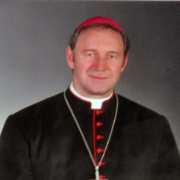 This was reported by the Austrian news agency 'kathpress'.

The Media Bosses Know the Background

At present Archbishop Bezak is located, according to press reports, in a cloister of the Redemptorists in Bratislava.

The Slovakian television station 'TA3' will publish before long, the background of the dismissal.

The broadcaster presented an exchange of letters between Msgr Bezak and the Roman Bishops Congregation.

The documents contain information of an query of the Archbishop regarding his financial situation, his faithfulness and his manner of life.

The president of the Slovakian Bishops Conference, Archbishop Stanislav Zvolensky of Pressburg, confirmed the truthfulness of this information in a press conference.

Previously to that, he met with the Slovakian nuncio, Archbishop Mario Giordana, for four hours.

Who it was that brought the confidential documents to light, he did not say.

This Inquiry Came Too Late

The Bishops Congregation asked Msgr Bezak -- in hindsight -- about the state of his priestly ordination, about euthanasia, abortion, premarital infidelity and women's ordination.

The Archbishop worked prior to his ordination as Bishop in April 2009, as an Old Liberal Professor of Moral Theology.

Still further, the Bishops Congregation charged that Msgr. Bezak is said to have "presented himself in secular clothing (jeans and shirt, sweat suit)".

Still, the secular style of the contemporary clergyman (zeitgeistlichen) was well known before his ordination to Bishop...

As Everywhere:  He promoted the Vermin of the Diocese

The Bishops Congregation informed Msgr Bezak also about the financial situation of the Archdiocese and about the conduct of a female business manager.

Msgr Bezak had to justify himself further, because he had surrounded himself "with colleagues of dubious reputation".

The situation related to homosexual clergy and priests living in concubinage.

The Bishops Congregation presented information -- and photographs --, where the Archbishop visited "gyms, saunas, baths and public showers" with dubious persons.

Back or Homosexual Problems?

In the response to the last criticism, Msgr Bezak criticized the sharp tone of the Congregation.

He didn't know what a "public shower" was, has no times for baths and is not interested in saunas.

He was simply at the sports center because of his back problem.

Posted by Tancred at 3:37 PM No comments: