"Since then, it hasn't been going forwards, but backwards." 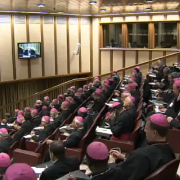 Edit: in other words, it's not just going to confession, but having a good resolution to do something about your obligations and the state of your Diocese.

Nothing besides the Sacrament of Penance:  Joachim Cardinal Meisner recommends going to confession more often -- instead of solving the problems in the Church.

(Kreuz.net)  "We have sat here since the past week and have listened to the interventions from early morning until the evening -- which are very interesting."

The Neoconservative Cardinal Joachim Meisner Cologne reaffirmed this yesterday for his Old Liberal Flamer-Site 'domradio.de' [They were preaching out against the "sins" of homophobia, earlier and Cardinal Meisner hasn't done anything to correct them.]

When he was asked to explain "very interesting", he explained:  "Everyone has the opportunity, to give an intervention.  This makes the work a bit laborious.

Because: "Getting down to business" in discussion circles -- where the Germans stew in their own juices.

The Cardinal spoke of a "disappearing faith".

He described himself as a veteran of synods who has participated in ten such gatherings.

Only: "Since then, it hasn't gone forward, but backward."  -- insisted the Cardinal soberly.

Certainly he could not bear the hard reality for long, but  quickly got out of it by talking about the "Holy Ghost".

Despite which -- according to his own account -- the ten Bla-bla Synods he had gotten through, he still effused optimism:  "I am of good hope that the Snod can have a good result."

His website  attempted to hack back into it:  "Can you talk about what has been done wrong up until now?"

Cardinal Meisner retreated:  "I can only say what I've done wrong."

Or:  "And that's something you must also ask yourself."

Here is a solution:  "Are we going regularly to confession, that the sins of our life will be effaced and we will make room for the Holy Ghost?"

Fact: At least based on the situation of the Church in Cologne and in Germany it can be concluded that Cardinal Meisner isn't going to confession enough.

The Problem is not the World

He cited John Paul II:  "The conditions in the secular society have become significantly more difficult."

Still, the problem isn't the world, but the priests and bishops who've become more worldly -- and its vanishing faith.

Posted by Tancred at 1:43 PM No comments: