Before you get outraged and call the Catholic League....

Ask yourself, how much of this has been made possible by the fact that enough of our priests have been acting like rabbis for the past six decades? In the past, tracts like Maria Monk relied on an ignorant Protestant population being shielded from the Faith for success. You can't even pick at minor details in this video. For example, the priest is offering Mass in a black suit and collar. But, I'm sure this has happened at a Nervous disOrdo parish somewhere with a lectern placed in the middle of the sanctuary aping the Calvinists. The only thing that could still leave us incredulous is all of the people going to confession and a priest talking about Hell. That's libelous. 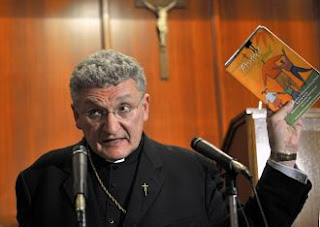 Edit:  Bishop Zubik stands accused of abusing one of his students.  The accusation has some credibility in our eyes because +Zubik is an ecclesiastical Liberal who has, admittedly, been somewhat friendly to traditional societies in "good standing" with the Catholic Church.  Aside from following various  programs like Virtus that are designed to indemnify Liberal prelates, priests and their government subsidized education and charitable institutions.  By the way these programs don't offer a lot of help spiritually and some say they even corrupt innocence.   +Zubik and others like him have been working to undermine it for years.

But it won't matter how hokey and sterile the remedial  programs in place are, the liberal media knights are going to cover for their boy whether he's guilty or not and they're already attacking the credibility of the accuser's charges by suggesting a nefarious motive.  But what has Bishop Zubik done in the past that might lend credibility to the accuser's charges in our mind?

The Bishop is somewhat favorable to tradition, although he's been hostile to the SSPX.  He's an exponent of the Polka Mass, he refused to sell a church property to the SSPX and instead sold it to a protestant group and violated the law in the process.  He's also into issuing these symbolic apologies that have done so much to aid the Church helping people to better understand the Church's role in relation to society and done nothing to really describe that these cases are extremely rare and are largely the result of homosexual predation, Modernism and moral relativism.

It's also important to note that Bishop Zubik doesn't believe homosexuality is a problem, citing the John Jay College of Criminal Justice on a KDK interview.

“The Church … has the responsibility to protect the sacredness of the Eucharist from any abuse, inclusive of politicizing Communion. [It's a bad sign when they drag out this verbiage to excuse inaction as well as omissions.] If a time came where I must engage any individual for any reason in regard to reception of the Eucharist, that would be solely between myself as pastor and that person as a member of my flock.”

And what was the result  of this pastoral approach?  Senator Casey voted for the healthcare bill without assurances that it funds would not go for abortion.

What does this have to do with the abuse accusation?  Well, to be brief, most of the abuses are homosexual in nature, and there are many homosexuals who've infiltrated the Catholic Church.  Many of these men are less than favorable toward Catholic teaching and in so far as they are inconsistent to Catholic tradition, they are undermining the Catholic position.  It is such men and women who've presided over the destruction of Catholic education in the analogous case of Notre Dame, for example, which hosted a pro-abortion president to speak in a position of honor.  The late Dominican Friar, Father John O'Connor speaks at great length on this matter.  He suggests that there are even Bishops involved:


It may be that these accusations are untrue.  The accuser certainly acted strangely, attempting to use his allegations to have the Bishop intervene on his behalf to obtain a lay ministry position, that had been barred to him because of a criminal conviction.  This alleged abuse took place back in the eighties.  The accuser with the Bishop in June with his wife, when he asked for the Bishop's assistance in this matter and of course it was refused.

The case is interesting, if a bit jumbled, with some varying motives.  The accused is claiming that his pastor, Father Michael  Yaksick is guilty of violating the seal of confession.  One thing I'm not seeing here is that there were two other priests whom Mr. Rock is accusing. He writes on his blog:


He had asked me why I haven't been to church in such a long time. I told him because of the two priest that had molested me. Fr. Bob Wolk in the summer of 1979, he is a convicted registered sex offender in Florida, and ex-priest. Fr. Leo Burchantti in 1989, he is also an ex-priest. Now my pastor took my confidential confession out of the confessional to the Bishop. They offered me counseling, and at first i rejected. Then it kinda bugged me a little, I wanted to know if it was what makes me so angry.

He's also claiming that smelling Bishop Zubik's aftershave triggered things he's suppressed from the past.  He says that the Liberal Bishop tried to kiss him.

In any event, it's a good thing for +Zubik that he is an Old Liberal and supported Obama's Healthcare Initiative, Polka Masses and the unjust treatment of "schismstic" traditional socieites, otherwise, he'd probably be offering his resignation instead of fighting the allegations.

One additional thing that's unfortunate is that Rock went to SNAP.  It's tragic that those who have had these experiences with homosexual priests have no where else to turn than these professional victim organizations with their hidden agendas.

So there you have it, we've said that +Zubik may or may not be guilty, but he bears many of the hallmarks of an abuser in his implementation of  sex education for children, treating traditionalists unjustly, participating in and promoting Liturgical abuses and sacrileges like Polka Masses and his suspicious support for the John Jay study that claims homosexuality is a cause of sex abuse.
Posted by Tancred at 8:52 AM 1 comment: