Women at the altar - This is obviously what the German-speaking department of Radio Vatican wants and has published strange pictures on its Facebook page. After protests by Catholics the pictures were removed - PHOTO

Vatican (kath.net) The German-speaking department of Radio Vatican yesterday, again, provoked Catholics with a strange selection of pictures and caused a certain ideological headlines to flash on their website. For example, on the Facebook site, with reference to an article on the Holy Eucharist and the phrase "How was the bread and wine again?" "What is the Body and Blood of Christ? " Strange photographs were published in which various women in civilian clothes are to be seen at the altar with the Blessed Sacrament together with an open sacramentary. Above all, a picture clearly gives the impression that a Catholic priestess is active on the altar.


After protests by the faithful on the Facebook page of Vatican Radio, the photos were later partly replaced or supplemented.

Edit: some may remember the last two times we reported this when they were promoting sodomy. 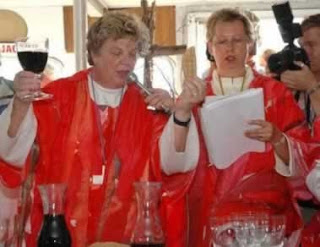 The Diocese of Venice, Florida has issued an official explanation on the need of the members of this organization for "repentence" here on, Fratres.

Those who take part within the ceremony in any manner, as an immediate and direct consequence of their own actions, separate themselves from the Catholic Church by automatic excommunication. Especially grave, and beyond the usual paths of public repentance, conversion and forgiveness, are those instances in which really bad and awkward liturgical dance is admitted causing further harm and division within the community and greater public scandal.

We can think of a few obvious examples related to this Diocesan statement and are cautiously optimistic.

Women priests will no longer be contained.
Posted by Tancred at 6:13 AM No comments:

Women priests will no longer be contained

Priestess Jeaney gets some help from Rip Taylor at a Bacchanalian celebration, where young men, if there are any present, may be sacrificed. Perhaps young men fear the women dominated Church because they fear being subject to the fate of Pentheus?

Using spurious scholarship to support their claims, these women on a mission officiate at ceremonies where journalists often outnumber participants. A small number of people really want this to happen, but it's a sure-fire way to empty a church as most of America's main-line denominations are discovering as they sink into irrelevance; unfortunately for them, sneaky PR gadjetry often enhances the hilarity of their position rather than lead them to consciousness of the problem. That's what makes satire so wonderful, is the blissful ignorance of a man, or in this case a woman, about to step into a casm of well-deserved ridicule. Of course, the practice of allowing women on the altar at all is often confusing; as much as we might revere particular women, they don't belong up there any more than the elderly Knights of Columbus guys who insist on "doing" the readings on Sundays in somber colored suit and tie to the deafening tedium of the scant "massgoers" who endure it all, again. From an aesthetic standpoint, it demeans the liturgy, it's part of an overall programme to mashe everything down to the level of pablum which most men don't find very necessary or enervating.

The overweening presence of women in parish life, in liturgical functions is simply more evidence, certainly stronger evidence then their archaeological "evidence" of wymyn Bishops, that there is a common causality between low participation in Church by marriageable adult males. It's an opportunity to take a nap or stay in bed on Sundays.
Posted by Tancred at 9:22 PM No comments: