Sorry, Francis Hasn't Been Arrested by the Caribinieri After Blackout 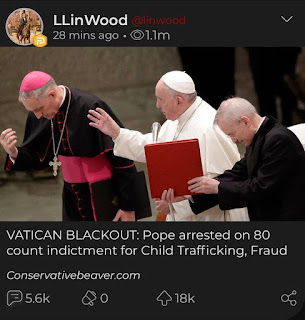 Edit: I would love it if they arrested Bergoglio as Lin Wood is claiming right now, but it appears to be false. It's not the first time a secular authority has arrested a pope.  Remember Philip the Fair having Boniface VIII arrested in 1303?  A lot of current historians suggest that Boniface had overstepped his bounds.  They don't seem to have been fond of his infallible Bull, Unam Sanctam, once again defining the ancient dogma, No Salvation Outside the Catholic Church.  But this is Bergoglio we're talking about, is he even a pope?  He often goes out of his way to indicate he rejects the essence of the papacy and all that office is supposed to defend, and that's why the world loves him and despises Boniface VIII.

I received so many links to videos and articles about how a huge sting was underway. There was a gunfight. The Vatican was surrounded by military and police. And the pope was arrested and being held in an Italian prison waiting for the FBI to arrive.
Now, I love a good conspiracy as much as everyone. You might remember when I posted the video of smoke rising over the Vatican.
That video was shown in newscasts all over the world. It was actually a fire at a nearby tire shop. I’m in Snopes now thanks to that one. But a gunfight at the Vatican and the pope being held by the FBI.. what?

Bergoglio getting ready to "pray" the Angelus:
Posted by Tancred at 8:51 AM 9 comments: