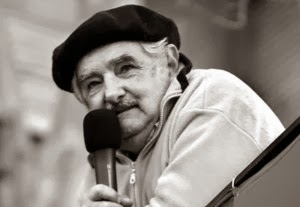 The road to the Presidential Palace was made possible by a broad leftist coalition, the Frente Amplio  (FA), whose pillars Mujicas MPP, is like the political arm of the former guerrilla movement, forming the Socialist Party and the Communist Party of Uruguay. The spectrum ranges from the left wing of the Christian to left-wing extremism. At international level, the FA is part of the Socialist International . It holds 50 of 99 and 16 of 30 seats, a slim majority in both chambers of the Uruguayan Parliament.
Since taking office in 2010, Uruguay has become the parade ground to the left of liberal society politicians. The first official act, the killing of unborn children, was legalized, against which his predecessor, Tabare Vazquez still struggles with a veto and great personal commitment. The doctor, Vazquez, stood at that time against his own Socialist Party, which he left in protest because of their position in favor of infanticide. The "poor" Pepe Mujica had no such scruples.  After his election as president, he said, he covered the murder of unborn children as the "rights of women". Today abortion is legal in Uruguay to the 12th Week of pregnancy.  Then El Pepe pushed for Uruguay to become the first South American country to legalize "gay marriage".  Now the cultivation and sale of marijuana has been legalized.
Text: Giuseppe Nardi
image: ACI Prensa
Trans: Tancred vekron99@hotmail.com
Link to Katholisches...
AMGD
Posted by Tancred at 12:34 PM 7 comments:

Montevideo (kath.net/KNA)  The Catholic Church in Uruguay has considered the excommunication of Parliamentarians according to the news daily 'El Observador' (Thursday),  which is being invoked because of the new abortion law.  "The automatic Excommunication succeeds if a person directly supports abortion, and this is direct support",  said the release of the General Secretary of the Uruguayan Bishops' Conference, Bishop Heriberto Bodeant.

The Senate of Uruguay passed a controversial abortion law on Wednesday.  Uruguay is, like Cuba and Guyana the third country in Latin America, which has legalized the termination of pregnancy in the first twelve weeks.  17 of 31 Senate members voted for the new ruling.  The decision was accompanied in the last weeks with a heated social debate.

The Bishops' Conference of the country spoke against the legal initiative of the governing left-leaning Party Frente Amplio.  A statement of the capital Archdiocese of Montevideo spoke of a "sad day for Uruguay" on Thursday.