Cardinal Sarah: "Second Vatican Council Never Required Us to Give up the Mass of Pius V"

(Paris), the French editors of Aleteia have published an interview with Cardinal Robert Sarah, the new Prefect of the Roman Congregation for Divine Worship and the Discipline of the Sacraments. The interview by Elisabeth de Baudouin touches on a wide range of topics, "the liturgy war, criticism of the Pope, Manif pour tous, Islam and Islamism, the significance of Africa."  Cardinal Sarah stayed for a few days in Paris to present a  new book conversation with the writer Nicolas Diat  "God or nothing". On the subject of liturgy, the Cardinal Prefect said:
Eminence, in your book "God or Nothing" you mention the "Liturgy of war" several times that has separated Catholics for decades. A particularly reprehensible war, you say, because the Catholics in this matter should be particularly united. How can these separations be overcome today and all  Catholics unite around the cult offered by God?
Cardinal Robert Sarah: The Second Vatican Council has never required us to reject the past and abandon the Mass of Pius V, which has produced many saints, and never to even give up Latin. On the other hand, it was  self-willed by the Council liturgical reform itself. The liturgy is the place of direct encounter with God, to bring Him in all our lives, our work, and to offer all this as a sacrifice for His glory. We can not celebrate the liturgy in the weapons and wear armor of hatred, struggle. Jesus Himself said: "Before you  offer your gift at the altar, go first to be reconciled to thy brother." In this encounter, 'face to face'  with God, our heart must be pure, each free from all hatred and resentment. Everyone must remove from his heart that which can obscure this encounter. This assumes that everyone is respected according to his sensibility.
Is this not exactly what Benedict XVI. wanted?
Cardinal Robert Sarah: Yes, that is the meaning of the motu proprio Summorum Pontificum. Benedict XVI. has put a lot of energy and hope in it. Unfortunately, it's not quite succeeded since  both the one and the other is "held fast" to their rites and are mutually exclusive. In the Church everyone should be able to celebrate after their own sensibility. This is one of the conditions for the reconciliation. You must lead the people to the beauty of the liturgy to its holiness. The Eucharist is not a "meal with friends", but a sacred mystery. If it is  celebrated with fervor and beauty, we arrive at a reconciliation that is self-evident. However, we must not forget that it is God who reconciles, and that takes time.
Translation: Giuseppe Nardi
image: Aleteia
Link to Katholisches...
AMDG
Posted by Tancred at 4:30 PM 31 comments:

For Salzburg's Archbishop, Christ was Not High Priest, But "A Layman"? 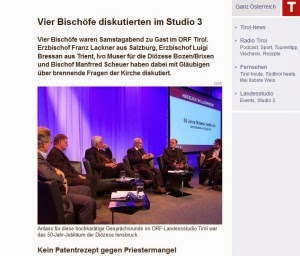 (Vienna) On the occasion of the re-division of the diocesan boundaries in Tirol 50 years ago, the ORF invited the bishops of the old county of Tyrol to "talk." 50 years before 1964, the Catholic Church drew  boundaries as a consequence of the    the end of World War to  divide  the former Austrian crown land at the Inn and Etsch valleys. Archbishop Lackner made Jesus a layman in the  question of the shortage of priests.
In 1964, the diocesan borders were adapted to the new international boundaries and administrative units. From the remaining portion of the Diocese of Brixen in Austria was the new diocese of Innsbruck. The old Diocese of Brixen was  extended from the so-called German share of the diocese of Trent and renamed the Diocese of Bozen-Brixen. The reduced diocese of Trent was elevated to an archdiocese. The Bishopric of Trent and the Diocese of Bolzano-Bressanone [Bozen-Brixen] have been subject since 1921 directly to the Pope. Trent has no suffragan dioceses and Bolzano-Bressanone belongs to  a Metropolitan Province. The new diocese of Innsbruck, however, is suffragan of Salzburg, as was the Diocese of Brixen since 798.

In the ORF regional studios in Tirol, the archbishops Franz Lackner (Salzburg) and Luigi Bressan (Trent) and Bishops Ivo Muser (Bolzano-Bressanone) and Manfred Scheuer (Innsbruck), met to look back at the past 50 years and attempt an outlook for the future.
"We are in a situation of massive radical change and transition and there arises the question: who puts his life, even his profession in the service of God and man? (...) We need pastors, priests, religious, religion teachers, pastoral assistance,"  said the Bishop Manfred Scheuer of Innsbruck, reigning since 2003  and pleaded for an "option for the youth."
"The gospel is and remains unrivaled  back then and now," said the Bishop of Brixen, Ivo Muser, reigning in his diocese since 2001. "Faith should not be imposed but must be made alive visible."
"Everyone is called to be  Church and participate in the pastoral care" said Bishop Muser to Orf again: "For all the importance of the priestly ministry, it is important that we do not just fix pastoral care on the priest alone. We are all called to be Church, to do our part. Each with their own skills, each with their own skills and potential."

Lackner: "We have Forgotten that Jesus was a Layman." 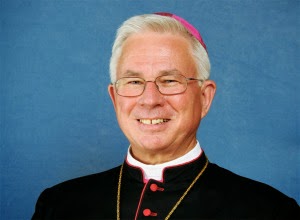 Archbishop Franz Lackner
A topic of conversation was the shortage of priests. The responses of the bishops remained superficial and concentrated to emphasize the role of the laity. With the devaluation of the priesthood and appreciation of the laity, the new Archbishop of Salzburg went the furthest.
The new archbishop of Salzburg, the Franciscan Franz Lackner, reigning since January 12, 2014,  said, "The Future of the Church" will include fewer priests, but that "the laity can take on important and responsible positions in the Church." These tasks should not belittle you, Lackner said. "We have forgotten that Jesus was a layman."
The statement of the Archbishop is on the website of the Archdiocese of Salzburg was taken and distributed without supplementing and amending. Even Martin Luther was clear that Jesus Christ is the true High Priest who knew him as it was known in the Old Testament for the Temple of Jerusalem.  More recent Protestant splits like the New Apostolic Church, emphasize the position of Christ as High Priest. However, the Catholic Archbishop of Salzburg and Primas Germaniae holds Jesus Christ for a layman?
An archbishop who  presents Jesus  as a layman? Son of God, who is under the priesthood? Jesus Christ is not just a high priest par excellence, who gave the Eucharist and the priesthood?  Is Jesus not as God incarnate, from whom all ordination offices pass through the setting up of Peter and his primacy? No succession, which ranges from Christ to Peter to every bishop since then, until the last priest? What would  this succession be  if Jesus Christ had been merely a "layman"?
Salzburg, like all old diocese, selects three candidates from its  chapter for new archbishop to be chosen by the Holy See.
Text: Giuseppe Nardi
image: ORF Tirol / Archdiocese of Vienna (Screenshots)
Trans: Tancred vekron99@hotmail.com
Link to Katholisches...
AMDG
Posted by Tancred at 10:10 AM 12 comments: 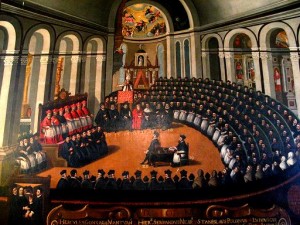 Translated from, katholisches, which got the story from an Italian site...
Posted by Tancred at 3:57 PM 3 comments: