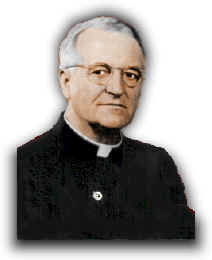 In 1958, Feeney correctly wrote that “the Jewish race constitutes a united anti-Christian bloc within Christian society, and is working for the overthrow of that society by every means at its disposal.”


We were just made aware of an ill-intentioned article by the underemployed husband of recently Simcha Fischer, who was recently fired from her job as a writer for the National Catholic Register with her compatriot in religious indifferentism, Mark Shea.  The local ordinary, it appears, no longer wants the Slaves of the Immaculate, a truly Catholic organization founded by Father Leonard Feeney, to teach the Catholic Faith whole and entire.  He is, it also appears, ashamed of Christ.  The diocesan representative, Fr. Georges de Laire, isn't specific about what the issue is, but says:


“They regularly use semantics to mislead people”

What's interesting is to see all of the unfavorable comments in response to this poorly researched and malicious article. Please contribute your own. Anthony writes:


It saddens me that the amount disinformation, ignorance and deception surrounds this truth still exists. If any catholic denies the defined dogma of Outside the Church the is no salvation that person becomes at least a material heretic. The disinfo in the story is this : If the group is schismatic then they don’t recognize the authority of the Bishop and sanctions are meaningless. Is the Bishop going to sanction the local Orthodox church which is definitely in schism. No, he isn’t he can’t. The fact that sanctions are mentioned is because they are Catholics. This demonic stupidity. The church teaches you must be justified to be saved which means in a state of grace which is only achieved in the Catholic Church. To deny this truth is the commission of a mortal.


“I’m really proud of the Catholic Church’s decision here,” said Heidi Beirch of the Southern Poverty Law Center. “They’ve denounced them for years over their anti-semitism.”

Learn the truth about the teachings of the Catholic Church and the Crusade to make America Catholic, here.

John Paul II Said, "No Salvation Outside the Catholic Church" more than any Pope in History

Pope John Paul II " The mystery of salvation is continued and accomplished in the Church, and from
this single source it reaches the whole world. There is no salvation outside the Church. From her
alone there flows the life giving force destined to renew the whole of humanity, directing every human
being to become a part of the Mystical Body of Christ."
Losservatore Romano Oct.12,1981

Pope John Paul II " There is no entering into salvation outside of the Church, just as in the time of
the Deluge there was none outside the Ark which denotes the Church."
Wanderer May 4, 1992