Pope Benedict and the SSPX: A Chronology


Edit: for the record from pius.de, Germany’s SSPX website. 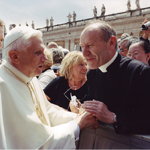 Pope Benedict resigns. A sensational report from Rome, special programs, reports, recaps: The issue is all the rage. Never since Celestine V in 1294, a pope has resigned. [Gregory XII]

The pontificate was marked by Benedict's attempt to find a canonical solution for the SSPX. Already in 2009, the pontiff had withdrawn the unjust Excommunication against the four bishops consecrated by Archbishop Lefebvre.

Unjust because Archbishop Lefebvre did not wish to split with the consecration, but wanted to save the tradition.

pius.info has summarized all the stages of the talks between Pope Benedict and the SSPX, which began in 2005

(Photo: Pope Benedict and Father Franz Schmidberger at a general audience in Rome)

2005: Bishop Fellay welcomed the election of Cardinal Ratzinger as Pope as a "ray of hope". End of August, Bishop Fellay of Benedict XVI. received in audience. The conversation showed, according to the Vatican, the "desire to arrive at a perfect communion.”

July 2007: Benedict XVI. allowed in the letter " Summorum Pontificum "that Masses may be celebrated everywhere according to the rite of 1962. This is now called "extraordinary form of the Roman Rite.”

15th December 2008: In a letter to "Ecclesia Dei" Fellay asks for the remission of the excommunication on behalf of the four bishops. He assures the recognition of papal primacy and the acceptance of the Magisterium of the Pope.

24th January 2009: The Vatican shares the remission of the excommunication in a formal communication. Almost simultaneously, a Swedish TV interview is made known in which Williamson denied the existence of gas chambers. ( Opinion of the district )

10th March 2009: Benedict XVI. wrote to all the bishops of the universal Church. In it, he admits technical mistakes of the Curia in the Williamson affair, he also reiterated its intention to integrate the SSPX back into the Catholic Church.

8th July 2009: Benedict XVI. binds the Commission "Ecclesia Dei" closely to the CDF and he invites the SSPX  to regular discussions about doctrinal issues in Rome.  The decision on the results remain subject to the Pope.

26th October 2009: At the headquarters of the Congregation in Rome beginning theological discussions in a "cordial, respectful and constructive atmosphere". For the Holy See, representatives of the CDF and the Commission "Ecclesia Dei” take part, followed by ten more meetings. For an interview,  read the interview with Bishop Fellay

14th September 2011: The Vatican puts a “Doctrinal Statement” before the leadership of the SSPX on basic beliefs of the Catholic Church for signature. In case the Brotherhood agrees, discussions on legal and structural issues of integration could be included.  ( asked the Superior General in Rome )

7th October 2011: On the Feast of the Holy  Rosary the meeting of the Superiors of the Society of St. Pius X.  begins in Albano (Rome). The 30 priests discuss the "Doctrinal Statement” presented by Rome.

16th March 2012: The Superior General meets with the Prefect of the Congregation of the Faith, Cardinal William Levada. The offer extended to the Society  "is not enough to overcome the doctrinal problems," said the written reply of the Cardinal. Rome expected a renewed statement from the SSPX in a month. (For the Vatican press Communiquée )

15th April: Renewed response from Bishop Fellay. The Press Office of the Vatican confirmed receipt of the response as follows: "The text of the response of HE Bishop Bernard Fellay, Superior General of the Priestly Fraternity of St. Pius X, who was at the meeting of March 16, 2012 called for the Offices of the Congregation is arrived yesterday, April 17, 2012. This response is checked by the dicastery and is then submitted to the judgment of the Holy See." (Rome, 18.4. 2012)

13th June: The Superior General and his first assistant (Father Pfluger) come to Rome to accept the response of the CDF. There is a two-hour meeting with the Prefect of the Congregation, Cardinal Levada. Bishop Fellay explained again his answer as “Declaration doctrinale" [declaration of faith]. During the discussions, the deep gap in teaching (Arrangement of the New Mass, controversial points of Vatican II) was addressed again. A continuation of the theological conversations is formulated as a possibility. In addition, the Superior General is presented with a concept for the recognition of the Fraternity of St. Pius X as a "personal prelature."

26th June 2012: Pope Benedict appoints a new contact for the SSPX: The Italian-American Curial Archbishop, Joseph Augustine Di Noia, was appointed Vice President for the Vatican Commission "Ecclesia Dei", and will continue on behalf of the President of "Ecclesia Dei", the prefect of the Congregation , to coordinate unification efforts with the traditionalist Society of St. Pius X .

Second July 2012: Pope appoints Bishop Gerhard Ludwig Müller to the Roman Curia, and appoints him as the successor to William Joseph Levada, Prefect of the Congregation for the Doctrine of the Faith, as well as President of the Pontifical Commission Ecclesia Dei, the Pontifical Biblical Commission and of the International Theological Commission. Thus Bishop Muller is the negotiator for talks with the SSPX.

9th - 14 July 2012: At the mother house of Ecône (Switzerland)the General Chapter of the Brotherhood is convened to the focus on the talks with Rome. The tenor is clear that the "Doctrinal Statement" can not be signed without further ado. The General Chapter shall adopt a "Declaration of Principles ".

19th July 2012: Rome recognized the receipt of the Declaration of Principles , It doesn’t see an acceptable response to the Doctrinal Clarification: "The Holy See has taken note of the Declaration, but remains in anticipation of the announced official release of the SSPX regarding the continuation of the dialogue between the Society and the Pontifical commission 'Ecclesia Dei'. " ( Opinion of the Vatican )

4th October 2012: Bishop Williamson is expelled from the Society. The General House justified the step in an official statement : "HE Bishop Richard Williamson has removed himself for several years from the leadership and direction of the Society, and refused to offer the respect and obedience which he owes his lawful superiors."

4th February 2013: Archbishop Müller puts pressure on the SSPX. In an interview with Die [very anti-Catholic] Welt , he announces, "We will not wait forever,”

Die Welt:. How will you continue the process of reconciliation with the estranged Pius brothers.

Müller:.. "Easy and hard. The CDF has presented the Society with the Doctrinal Preamble which  includes nothing but the totality of the Catholic faith, where the Pope is legitimately entitled to the finally binding teaching authority.  It has been given no response so far.  We are waiting but not forever. “ [++Mueller has lied about representing the Pope’s will before.]

How will continue the negotiations? Will the new pontiff be open to the concerns of the Tradition?  Will he protect what Benedict has already accomplished?

The General House of the SSPX has issued a statement on the resignation of the Pope and thanks him for his courage and steadfastness. The Superior General, Bishop Fellay calls for prayer for a pope who renews all things in Christ.