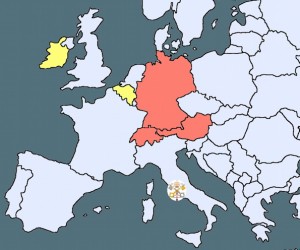 [Katholisches, Switzerland] A view to the map shows that the anti-Roman Rebelion in the Catholic Church is focused in the German speaking countries.  The interdependence of the successes in Austria, Switzerland and Germany are clear.  Ultimately, it consists, from a span of five hundred years, to the exact same constellation as in the time of the Reformation, which led to the schism of the Church.  It was also a schism of the German people and a weakening of the Holy Roman Empire in Central Europe from which it never recovered.


Thus, the rebellious  Memorandists are found scattered throughout the German speaking countries. The targeting by the insurgents currently  of the Bishop of Chur by rebels is a deja vu . Already in 1990  Bishop Wolfgang Haas had a hard time after he was appointed by John Paul II.  The opposition to him within his diocese was so large that he was carried away in 1997 to the Principality of Liechtenstein, which was removed from the diocese of Chur and even elevated to an Archbishopric.  Monsignor Haas has since resided in Vaduz. The rank increase over Chur signaled the unwillingness of Rome to address the whole transaction. Meanwhile, the old episcopal city   governed by Msgr Huonder on the Upper Rhine is a successor of  Bishop Haas.

Lenten Letter of 2012 Incites an Uproar


The particularity of this largest Diocese of Switzerland, which included the center of the Rebellion against Rome in the 16th century,  consists in that it is directly controlled by the Holy See.  The 19th century concordat concluded between the Confederation and Rome envisioned this privilege, that the selection of the Bishop takes place as an agreement between the Cathedral Chapter and the Holy See.  The Pope has the deciding word.  This was confirmed on the 6th of July in 2007 as Benedict XVI named Msgr Vitus Huonder, against whom now, because of his Lenten Pastoral Letter, stands many of his own priests and pastoral assistants as well as politicized laity and theologians.   Since the secular media in a religiously divided country like Switzerland tend mostly towards confrontation in any case, and the "Catholic" media has succumbed to the zeitgeist, the Bishop has a lot to endure. The leading Swiss media have attacked the Pastoral Letter with uncustomary unanimity as "as much explosive as absurd" and Archbishop Hunder as "archconservative".  These catch words are true to other anti-Church campaigns.

Pastor Refuses Reading in "our" Churches

The Lenten Pastoral Letter went out to all Parishes -- as is usual -- which is supposed to be read at all Liturgies, contained a statement which many could not endure, many parish gentlemen concluded.     Divorced and remarried  are to be refused the Sacraments.  Huonder represents here nothing but Church teaching.    That the Catholic ideal which is exorbitantly and quantiatively contradicted in practice in Switzerland, is what makes Catholic teaching a "scandal" for the world.  Bishop Huonder has hammered the nail onn the head with this, because Christianity must e a scandal to the world and especially in this time.  The Chur Superior Shepherd invoked Jesus, who defined marriage as indissoluble.  The divorced, who through their own free will have decided to engage in a new relationship have put themselves in a situation, which makes it impossible for them to receive the Sacraments.  It is not the Church that refuses them, but they themselves throuogh their own decision.    Divorced and Seperated, who live alone, give a precious witness for the indissolubility of marriage, says Bishop Huonder.

The media pour oil in the fire and outdo themselves with attacks: "Huonder isolated", "Again with Huonder?"  "Controversial Pastoral Letter".  On 11th March 2012 the Neue Zurcher Zeitung wrote: "The Chur Bishop, Vitus Huonder wants to close the Sacraments to those who are remarried" and demonstrated how little they, in any case, liberal quality newspapers know or want to know about Catholic teaching.   Such a lack of precision would allow them little else.

They drive the protest which has been spreading divisions among the priests and laity.  Church was made into an outpost of anti-Roman rebellion over night, whose manifest center had been Austria and the Bundesrepublic of Germany until recently.  The protest went even further, according to the Press Speaker of the Diocese, Giuseppe Graci who explained the motives for Bishop Hunder's business once again for the press.

For the Pastor of the Winterthur, Catholic Teaching is "Inhuman"

Clearly this is only the initial inflammation for an uproar that had been long formed underground.  The first to protest was a pastor of Chur, who openly declared, that the Pastoral Letter will not be read in "our" churches.  "We are also distancing ourselves from the form and also the content of such Pastoral Letters", wrote the Dean and Pastor of Winterthur, Hugo Gehring and made himself the speaker for "a lot of pastoral assistants" in the region of Winterthur and the lowlands of Zurich.  According to his opinion it is "in the weight of our experience, inhuman and not inferable from the Christian message",  in order to appeal to all the divorced members of the Catholic Church, to remain unmarried.    A Catholic Pastor, who describes Catholic teaching as "inhuman", appears in any case to have missed "Society" and "vocation".

Bishop Haas was replaced  and the Conflict continued underground


No Pastoral Letter had ever before unleashed such opposition, not even in  Bishop Haas's time.  Not because Bishop Huonder's position is so outlandish, his message is the message of the Catholic Church.  The inner process of fermentation against Catholic teaching since the 90s, when Haas was "replaced", has taken on a new dimension.  On the part of the Bishop of Chur it was explained that the aggressiveness of the opposition are with Bishop Huonder's measures to strengthen the orthodoxy and fidelity to Rome in his Diocese, because of the impatience of the protestors awoke at the same time, with which it "distanced" from those parts of the doctrine as they openly declare themselves.

According to Christian reitschmid, Press Officer of the Vicariate, Bishop Huonder took up a hot iron and those provoked more opposition than encouragement.  "The discussion was heavy all week.  The media of the entire region reported on the Pastoral Letter".  Breitschmid heard prevailingly "very critical comments" from the pastors.  According to his estimation, the majority of the Pastors had not read the Pastoral Letter and engage in practices prescribed by Rome and are ready also to provide the sacraments to divorced and remarried persons.


The Pastoral Council of Zurich wrote a breathless document in which it thanked  "all of the spiritual counselors, who helped those divorced and remarried to find their way in the Eucharistic Community of the Church".  It is an open front against the Bishop and against Rome.  The Pastoral Council promoted the spiritual counselor to even allow the remarried to Communion and the Sacraments.  In the writing of the Bishop, the Council overlooked the "law of charity", which is called for by the Gospels.  "Are we not all sinners?", asked the pastoral representative of Zurich.


In Switzerland Pastor Conrad Burri explained:  "To send everyone away who I know is remarried is absolutely unthinkable for me."  According to his opinion, every question has to coincide with his conscience, if he receives holy Communion or not "We priests can't judge that", says Burri.  He directs a polemical question to Bishop Huonder: "Where is the mercy toward the sinner in this directive?"


The Chief Shepherd of Church appears also to have hardly any support from the Bishops' Conference.  Kath.ch, the media portal of the Catholic Church, representing the Bishops' Conference entitled tellingly: "Vitus Huonder Provokes Bishops"  The Church Bishop "provoked" his colleagues, who also have themselves a dissenting opinion of the Catholic Catechism.  The "Initiative of Liberal Colleagues"  has confirmed rumors that have been circulating for months, that Bishops of the German language areas are pushing for a change in the "praxis" about remarried and divorced persons.

Bishop Huonder:  "Following the teaching of the Church means to be merficul"

"It is my right and above all my duty,  to call to memory the fundamentals of the Church", says Bishop Huonder.  Rome is silent at present still, whiel the wind of rebellion in the German speaking zone pipes ever more strongly.  The Diocesan Bishops appear not to have found a strategy, as they proceed against anti-Catholic faction in their own ranks, which continues to undermine the "Catholic Church while still claiming the name.

Translated from Katholisches....
Posted by Tancred at 1:58 AM 10 comments:

Editor A sign of still more great things to come? After reports in the media, a lot of international support including a Support the Bishop of Chur petition which was circulated widely, the Roman Authorities have ruled in favor of this goodly shepherd fighting against the Church-tax structure of Switzland's Old Liberal Elite.

The Roman journey of Bishop Vitus Huonder of Chur was a triumphal march.  by Maria Huppi.


(kreuz.net)  Bishop Vitus Hunder's Rome trip in the past week was an explosive success.

Pope Benedict XVI and the involved Curial Prelates stood behind him and encouraged him to forge ahead.

The prayers of thousands of his friends have been heard:  The Bishop will stay.

His enemies did not succeed in leading the Vatican head down the garden path.

The Old Liberal Bishop haters are beside themselves with fury.

They must realize that they are now sitting like Adolf Hitler in his Bunker.

It didn't help them to threaten to leave the Church.

A bleeding of the heterodox Swiss Church-tax system means a strengthening of the Catholic church.

Without money the Old Liberal Church-tax profiteers quickly lose their alleged interest in the Church.

Today the situation is much better than in the 90s.   Then it was possible with the help of John Paul II to topple the Confessor Bishop Wolfgang Haas.

The monopoly on information back then was in the hands of the anti-Church Media.

Also many enemies of the Church back then have retired, died or have left the Church in the meantime.

Additionally the most recent Theologian Pamphlet has brought the Curia and the Pope against the Old Liberals.

From Vatican circles it is to be heard that one works behind the scenes, doing the handiwork of anti-Catholic powers in the Church.

The recently released reform Decree on Philosophy Study is to be seen in connection with this event.

A program is required for the academic year 2012/13 as it has always existed in traditional institutions.

Otherwise it is according to the implementation for the Summorum Pontificum that the Old Mass is required in all Catholic Seminaries for priestly formation.

Now we will learn who is Catholic and who is schismatic.

Joy to the Traditionalist struggle against the Old Liberals.

Translated from kreuz.net...
Posted by Tancred at 5:30 PM No comments: