Pastor Karl Tropper -- An Exemplary Missionary and Shepherd from Austria 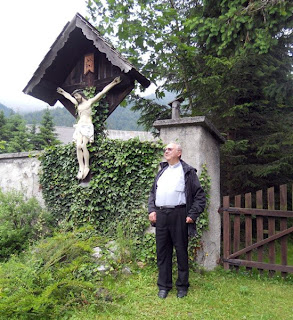 On 25 August Rev. Mag. Karl Tropper departs on a well-earned retirement from the parish church of St. Veit am Vogau Place, from where he has worked an extraordinary benediction for over 30 years. St. Veit am Vorgau is a village in Austria in the Diocese of Graz. He was previously silenced and suspended for telling the truth about fornication and sins which should not even be discussed among Christians. Long may he live.

In this ceremony, I like so many others again realized what this priest with a versatile personality has already done for our country and the Catholic Church.

Karl Tropper was born on 23 October, 1937 in Glojach and yet experienced the war, far from its front.

After attending the school and diocesan seminary in the period from 1948 to 1956, he studied from 1956 to 1961 at the Universities of Graz, Tübingen and Bonn.

His first job took him from 1961 to 1963 as chaplain to the village of Bad Walter and then up to the year 1968 as chaplain to Eibiswald and for one year after at Stainz.

After completion of the AHS certificate, he taught religion at a Gymnasium in Deutsclandberg, was then provisor in St. Ulrich in Greith and assistant chaplain in Stainz.

From 1971 to 1978 he also taught religion courses as a spiritual director at the diocesan Gymnasium, on which he devoted himself to the comprehensive education of his pupils, according to the testimony of former students and this was partly promoted accordingly through the donations of books.

From 1971 to 1989 he worked as a mission consultant of the diocese and in the years 1975 and 1978 head of the office of CSI (Christian Solidarity International) Austria, which he co-founded.

This led to international contacts with bishops, mission priests and other senior figures such as Christa Meves, the couple Inge and Max Thürkauf, Josip Terelya from Ukraine, the chess grandmaster Ludek Pachman (the beginning of the 80's, he had already predicted the end of the Soviet Union ), Hansjörg Stückl Berger (founder of CSI) Sabatina James, Tatiana Goritschewa etc. to which he was also invited to give a series of interesting lectures in Styria, drew numerous participants across our borders.

Something of the greatness of this humble priest was hinted at by Tatiana Goritschewa when ended her visit to St. Vitus with this note: "This man has saved countless lives through his activities!"

From 1978-1981 he was spiritual director and rector of education at Maria Trost and in 1980 also the parish Provisor of Graz-Kroisbach.

Parish of St. Veit am Vogau

From 1 September 1981 to 1989, he worked as a "pastor" in the parish of St. Veit am Vogau and Gabersdorf. During this time he was also for three years provisor in Strasbourg / Styria.

With the acquisition of the now independent Parish in the meantime, of St. Veit / Vogau on the 1st of September, 1989 he has continued for two years as pastor in Gabersdorf and again in 2002, shortly as Provisor of Gabersdorf and Strasbourg.

During this time, not only were costly renovations carried out, for example on the old sonorous organ, but Pastor Tropper also paid attention to the "interior renovation" of his parishioners. To this end, not only several parish missions, retreats, etc., were carried out, but also the famous and very readable parish bulletin of St. Veit was published, with comments on current world affairs, encouraging discussion and reflection. For his closest collaborators, he wrote another letter involving extensive extra-theological training.

In addition to building the public library and casino at St. Vitus at Vogau, he also tried, by voluminous knowledgeable correspondence, to actively counteract the disintegration of the faith in the parish church.

For the children, the basket was always full with attractive reading in church.

That our pastor Tropper has a great sense of humor and zest for life, he proved not only with the publication of appealing and sophisticated parish carnival fliers but also with the introduction of the parish festival in Strasbourg and St. Vitus.

Youth as a Special Concern

Pastor Tropper was the one who always encouraged young people to participate in World Youth Days and Roman trips. To inspire young people to live in accordance with God's commandments, he organized TEEN - Star courses and sea stays at a house in Donja Klada in Croatia, which he had renovated, where the participating youth were served by faithful families.

Of particular concern to him was that he had at heart the young, he finally also provided them with the publication of a separate parish youth bulletin.

To counteract the generally high divorce rate, he visited the Family Congress in Vienna with interested couples, and he built bridges to the Schoenstatt Movement, which were gladly accepted. Thus, two family celebrations and countless family gatherings in the parish hall he organized. The result was that a great multitude parishioners visited the family Academy and trained as presenters.

After a serious mountain accident in which several young people were seriously injured from his parish and died, he offered a most blessed "Night Prayer".

Pastor Tropper has presented to us this healing sacrament by his goodness and mercy in the confessional, and was often asked by traveling or Foreign priests in our parish for this service, not only before Mass but especially in the confessional. I could even see it in beaming faces of children, as well as he knew how to explain to the people, to take as often as possible the sacrament of penance as a blessing and deliverance.

All barriers and obstacles he turned over to the example of his Lord of All, like suffering, lonesomeness and sickness. For them he was available day and night. His concern for the sick led him to introduce additional consecrations of the Sacred Heart on First Fridays. So he came into the homes of the sick and could contribute much in this way to physical and emotional recovery.

He gave impetus to organize visits to seniors and in the process then resulted in a partnership with the Murauer seniors.

Through the organ renovation in 2002, he came up with the idea not only to perpetuate the recipes of St. Veit in a ring binder, but noted also funny and thoughtful events in writing.

The seniors were especially very grateful for the monthly care at home or in the village chapels, which he regularly came to celebrate the Holy Sacrifice for the village population.

These village chapels and Christian landmarks in the villages of his parish, he also asked to renovate and made a good example in the case of the newly built cemetery cross and the impressively designed stations of the cross behind the church.

He was also one of the few pastors who have helped in the Yugoslav crisis, of affected poor priests with medicines and money.

For newly built parsonage Shega Arad in Romania, rebuilt 20 years before, he was a key driver, as well as for more than 10 years for the care of the parish Kolibe in Bosnia.

Another highlight was the dedication of the bell: "Mary, Queen of Families" after his serious illness in 2007. He expressed the view that Christianity is not only meant for him, solidarity and critical position in regard to society, but also to show the world the signs of a kind and benevolent God as well.
That may have been the impetus for the publication of a book with the title: "Christ Carrying the Cross ... the Unreadable Book", which can be obtained from him now.

Pastor Tropper always put emphasis on, had prepared for the Liturgy with much attention and love.

Attractive and valuable Music and beauty in the cultus was not a luxury, but for him it is participation in the glory of God.

He certainly was a missionary in a certain way.

He who so struggled to grasp the gospel more deeply simply could not remain silent or pretend as if it would touch the souls entrusted to him, his parishioners, to not really think about it.

He has always let his new knowledge in this field to come to let us participate in this ineffable mystery of God in a dignified manner.

In his sermons and petitions he often brought from far to then plant the central message like a seed in our hearts. He has not dodged the big questions about our future and our way of life, but always related specifically to the situation back to the pressing issues and concerns of his community.

And the people have taken along with them and then discussed at the Gasthaus, at the church and at home - and yes you can say in this way, the living Word of God left no one in our parish in the cold.

He has also found himself in the way of the cross following Jesus Christ.

Pray for this great priest, that he may remain with us for a long time with his example and his vast knowledge of the faith.

Discussions with him at any time.