New Auxiliary for the Embattled Archdiocese of St. Paul 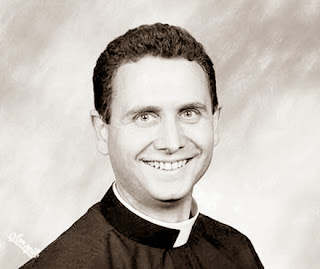 Edit: the new Auxiliary Bishop of Saint Paul, Minnesota will be young, and even on the conservative side, he will certainly not be hostile to tradition, if not openly friendly and encouraging Sources say that the new Auxiliary Bishop will be Father Andrew Cozzens.  He's a very nice man and not to be confused with the heterodox apostle of the CTA, Father Donald Cozzens.

Bishop Cozzens was given the task of explaining Indulgences to the Catholics of the Archdiocese.

Photograph stolen from the "Catholic" Spirit.

These things are important because it is felt here that the Archdiocese of Minneapolis and St. Paul are a test market for the direction of the American Church.  It was, incidentally, one of the first places in the world that had the Protestant innovation of Mass said the wrong way at the Parish of St. Helena in Minneapolis back in the 30s.  It is also not far from St. Paul that one of the most pernicious institutions in the Church still hosts a collection of Liturgical tinkerers in "Benedictine" Collegeville.

The CTA types will definitely complain about this appointment.
Posted by Tancred at 2:40 AM 1 comment:

The Ecumenical Movement Can Not be a Contract of Mutual Interests

Rome (www.kath.net/as)  The unity of Christians is the privileged medium of the credible presentation of the Faith to those who do not know Christ or those who have already received the Gospel as a priceless gift,  but have forgotten it again.   With these words, Pope Benedict XVI. addressed the Feast of the Conversion of Paul in the Papal Basilica of St. Paul Before the Walls to the faithful gathered for the Vespers at the conclusion of the week of prayer for the unity of Christians.

The unity among Christians, says the Pope, is above all a work of the Holy Ghost.  The prayer and the spiritual ecumenism "is formed in the heart of the mission of ecumenism,"  which without faith becomes a kind of contract of common interests.   The preconditions for a mutual brotherhood is in that the communion with the Father.

If the dialog reflects a priority for the Faith,  this is allowed, it opens itself with secure trust in God's work, that the Holy Ghost will lead to full communion.  This permits the acquisition of spiritual riches,, which are present in the various churches and church communities.

In view of a society as it appears today, where the Gospel appears ever less important,  but which is still in need of reconciliation, dialog and mutual understanding, the challenge is there to announce Christ in common and to give the world a shining example in the quest for communion."

The doctrinal question which still divide, "may not be left behind or set aside",  says Benedict XVI.  They must be courageously in a spirit of brotherhood and approached with mutual respect.  Ecumenism carries lasting fruits, if they are accompanied with concrete gestures, which heals the understanding and promotes relations.

"To go with God" means above all, to enter into the radicalness of the Faith, "like Abraham, we  trust in God and place all of our hope in Him."  At the same time this means that we go beyond limitations, "beyond hatred, of racism and social and religious discrimination, which divides entire societies and damages them."