John Paul II Square Will be Dedicated by Pope Before Enthronement

This Sunday, Pope Francis will take possession of the Lateran Basilica of Rome.  Shortly before the actual enthronement occurs, however, there will be another ceremony: the square in front the Roman General Vicarate, which has been called “Piazza San Giovanni in Laterano”, will be renamed “Largo Beato Giovanni Paolo II”.  Pope Francis will unveil the new street sign on Sunday at 5pm, which will be followed by a solemn Mass in the Basilica of St. John Lateran for the enthronement of Pope Francis on the See of Rome.

John Paul II, the predecessor of the current Pope had died after a long illness on April 2 of 2005  On May 1st of 2011, he was beatified after one of the shortest processes of Church history.  An inscription on the plaque will recall this date.  At the ceremony, among other things, the Cardinal Vicar of the Diocese of Rome, Agostino Vallini, and the Roman mayor Gianni Alemanno will be present.

Pope to Be Enthroned on Sunday, April 7

Edit: We were wondering when Pope Francis was going to be enthroned in his basilica. Here it is. The ceremony will take place tomorrow. It will be interesting to see the pageantry.

The ceremony takes place on Sunday 7 April at 17:30, in St. John Lateran. Pope Francis will co-celebrate the mass with Cardinals Vallini and Ruini

Tomorrow at 17:30 CET, Pope Francis will celebrate a solemn Eucharist and his enthronement as Bishop of Rome in the Arch-Basilica of St. John Lateran, the Cathedral of the Diocese of Rome. Cardinal Vicar, Agostino Vallini, Emeritus Vicar, Cardinal Camillo Ruini, the Bishops’ Council of the Diocese and the Council of Parish Prefects will be co-celebrating. Also attending will be Rome’s priest and students from the city’s Major and Minor Seminaries, the Redemptoris Mater, the Almo Collegio Capranica and the Oblates of the Oblates of Our Lady of Divine Love, as well as members of the Pontifical Chapel, in accordance with the Motu Proprio “Pontificalis Domus”. Communion will be offered by 75 permanent deacons and the Choir of the Diocese of Rome will offer musical accompaniment to the liturgy.

The Pope will be enthroned before the start of mass. After the enthronement, some Diocese representatives will pledge obedience and filial devotion to him on behalf of the Church of Rome. Representatives include: Cardinal Vicar Agostino Vallini; Mgr. Filippo Iannone; Vicar to Capitulate, Mgr. Luca Brandolini; Mgr. Pasquale Silla, parish priest of Santa Maria del Divino Amore in Rome’s Castel di Leva area (dean of parish priests); Fr. Daniele Natalizi, parish vicar of Santa Maria Assunta and San Michele in Rome’s Castel Romano area (the youngest in terms of ordination and age, he was ordained in 2012); Fr. Gianpaolo Pertici, Permanent Dean of the Nativita' di Nostro Signore Gesù Cristo parish, in the Appio Latino district; Fr. Marco Bellachioma, a member of the Franciscan Order of Friars Minor Conventual and diocesan secretary of the Italian Conference of Major Superiors (CISM); Sister Maria Giuseppina Abruzzini, a Salesian nun and diocesan secretary of the Union of Italian Major Superiors (USMI); Marco and Monica Curzi’s family with their four children: Francesco (11), Marta (10), Alessandro (9) and Paolo (6); Sofia Presciutti and Massimo Presti from the Diocese of Rome’s young people’s pastoral service.

The liturgy will be celebrated by 13 Seminarists from Roman Pontifical Major Seminary along with 2 Roman Seminarists from the Almo Collegio Capranica and assistant deacons Alberto Daniel Lopez Pantano (of Argentinean origin) and Fr. Giuseppe Conforti, both of whom will be ordained presbyters for the Diocese of Rome this coming 21 April. 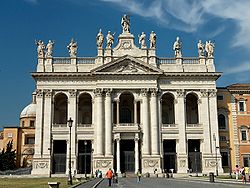