New Spingtime: Dominicans to Give up Oldest Cloister in German Speaking Area 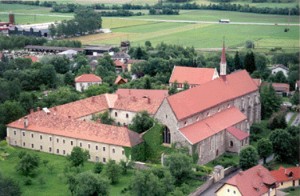 Edit: The closings are continuing.  Rorate Caeli just reported about the closing of the Monastery of St. Bernard in Switzerland.

(Friesach) The Dominican Order is giving its oldest lasting Cloister in the German speaking area.  The Dominican Cloister of Friesach in Kaertnen will be sold, as the Order Provincial told the Austrian newspaper Kleine Zeitung.  Negotiations with the city of Friesach are already in process.  The city administration is considering the use of the Cloister facility as a senior home or a youth center.  A sale is not in question due to reasons of cost.   For the Nicholas Church, the Diocese of Gurk-Klagenfurt has expressed interest, as the General Vicar Engelbert Guggenberger has stated.

A transfer of the Cloister property has been under discussion within the Order for years.  Already in 2006 the Provincial headquarters has reached a conclusion.  Today there are still two friars living in the Cloister.  The superlatives do not appear to have stopped the order.  Cloister Freisach is the oldest settlement of the Dominican Order in the German speaking area, as the Cloister church of St. Nicholas built in 1251 is the longest in use in Kaernten.

Already in the year 1217, only two years after the founding of the Order in France had still not taken place, but at the same time had come from the recently freed from heretical Albiginsians in Toulouse came the first Dominicans to Friesach,  with which formed the seed of the new community in the German speaking lands during the lifetime of St. Dominic Guzman himself (+1221). At its highest point there were 100 brothers in the Cloister. Then the Cloister went into decline, and there were times of spiritual deforestation of the Enlightenment.  They escaped the reforms of Emperor Joseph II. Through that time the Cloister lived through the French Revolutionary Spirit at the beginning of the 19th century in its decline.  In 1858 because of a lack of growth it had to be sold to Dominican Sisters of the Tirolean city of Lienz.  Through the recovery of the Order the Dominicans through the initiative of the Apostolic Nuncio Andreas Cardinal Fruhwirth, himself a Dominican, moved back to the Cloister in order to live again.  112 years later there is a second closing facing them.

Text: Giuseppe NardiBild: Dominikaner.org
Posted by Tancred at 1:12 AM 2 comments: