Pope Francis: "The Roman Curia is the Labor Union of the Faithful" 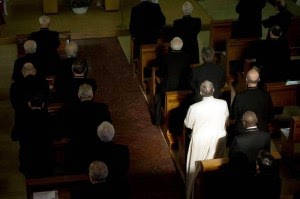 (Rome) After the end of the Spiritual Exercises for the Roman Curia, Pope Francis returned to the Vatican. In the morning he thanked the retreat preacher Don Angelo De Donati before leaving: "We return with  good seed back home. God will send the rain. "
A few minutes before 11:30 clock the tour bus arrived with Pope Francis and the collaborators of the Roman Curia back to the Vatican again. In recent days they had been participating in the Casa Divin Maestro  in Ariccia on Ignatian Spiritual Exercises.
At 9 o'clock the retreat had ended with the Closing Statement by Don Angelo De Donati, the retreat director. De Donati is a priest of the Diocese of Rome. He leads a spiritual retreat house and the smallest parish in Rome with barely 100 souls.
When Pope Francis thanked the preacher, he referred to himself and the 82 participating cardinals and bishops as a "labor union of the Faithful". "I thank you because you were the sower, and you can, you can! Because you throw here and there without noticing or at least you pretend you do not notice it, but you hit the mark, they come to the core, you hit the mark. Thanks for that. And I ask you to continue to pray for this labor union of the faithful. We are all sinners, but we all want to follow Jesus even more, without losing hope in the promises and without losing humor. Thank you. We now return with  good seed back home, the seed of the Word of God. The Lord will send rain and grow these seeds. He will grow and bear fruit. Let us thank the Lord for the seeds and for the rain, He sends. But we also want to thank the sower."
Today, the Pontifical House preacher Father Raniero Cantalamessa held the first Lenten sermon in the chapel Redemptoris Mater of the Apostolic Palace. The theme of the Lenten sermons in 2014 reads: "On the shoulders of giants. The great truths of our faith in the Latin Church Fathers."   The next four sermons are always held in the coming Fridays of the 21st and 28th of February and the 4th and 11th of March.
Text: Giuseppe Nardi
image: Una Fides
Trans:  Tancred vekron99@hotmail.com
Link to Katholisches....
AMGD
Posted by Tancred at 10:23 AM 3 comments: