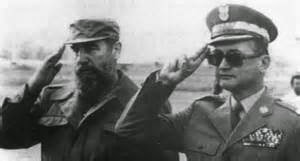 (Warsaw)  two days ago the former self-confessed atheist and communist dictator of Poland, Wojciech Witold Jaruzelski (1923-2014), passed away on May 25th in Warsaw, provided with the last sacraments and reconciled with the Catholic Church.
Jaruzelski was born into a Catholic family of the Polish gentry. The family fled to Lithuania to escape German troops  where it was captured by the invading Soviet troops and deported to the Altai Mountains. Jaruzelski and his father had to do forced labor. To avoid this, the 20-year-old joined the Polish Bering-Army established in the Soviet Union, which fought alongside the Red Army against the Axis powers.

Despite Soviet Deportation He Entered Into the CP

After the Second World War, he was admitted to the General Staff Academy. After the Soviets had wiped out the Polish officer corps  in 1940 at Katyn, Moscow built from 1945 a new Army loyal to the regime.  Thus, Jaruzelski joined the ruling Communist Party in Poland in 1947, established with Soviet Help in 1945, which became in 1948 the Polish United Workers' Party  (PZPR). In addition to the military, Jaruzelski quickly made ​​a political career. In 1956 he was promoted to General, from 1964 he was a member of the Central Committee of the PZPR. He was defense minister in 1968 because of his loyalty to the regime and led to Poland by the crushing of the Prague Spring.

When the free trade union movement Solidarity  under Lech Walesa shook the communist regime in Poland, Jaruzelski himself  was at the head of the regime and could withstand this   for several years. In 1981 he became Prime Minister of Poland, took over the party leadership of the PZPR and imposed martial law, outlawing Solidarity  which was supported by Pope John Paul II,  and forced it underground. He was later to be justified that  the clampdown was in order to prevent a planned military intervention by the Soviet Union and the Warsaw Pact by an intra-Polish solution. From 1985 to 1990 the general was Polish head of state.
His role in the Communist regime around the break-up of Solidarity and whether  democratic change followed because of his resistance is still controversial. In 1997 it became known that Jaruzelski had asked for military aid against the imposition of martial law in Moscow, should there be a need for it. In 2007 charges were  brought against him of Communist crimes. The former general was threatened with a conviction for high treason. Because of his poor health, the trial has been suspended.

As it is now from Poland,  the former Communist dictator died reconciled with the Catholic Church in his 91st year.The declared atheist and opponent of the Church was still touched at the end of his life   by the grace of God. He returned to the faith of his childhood, received the last sacraments, and died in the bosom of the Church. Perhaps this is thanks to the prayers of many Polish compatriots, who prayed for his conversion, which included the Polish Pope.
Text: Giuseppe Nardi
image: Semana
Trans: Tancred vekron99@hotmail.com
Link Katholisches...
AMGD

Holy Father: Freedom is Only in the Good

"In human cooperation freedom does not happen without solidarity.  Whatever is done at the expense of the other is not freedom, rather a culpable act, which impairs the other and also myself. I can only truly develop in freely for myself, if I employ my powers for the good of my fellow man.  That isn't only applicable to the private life, but also for society."

From a speech by Benedict XVI at Bellevue Palace in Berlin.
Posted by Tancred at 10:02 AM No comments: