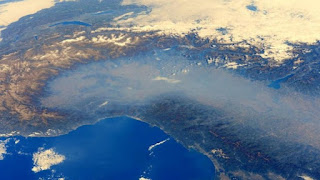 (Rome) "Smog in Italy", "Poor air in Italy", "air pollution in major Italian cities", "crisis meeting because of smog." The message is also reported thousands of kilometers away from Italy in the world news. It suits well the climate hype that would be hammered into an "infidel" nation. The real emergency  is not the climate and the smog, but the politicians and bishops.

HERE YOU CAN ADVERTISE »
A commentary by Riccardo Cascioli *
Nothing is more appropriate than the alleged smog emergency to make the bungling politicians and the contradictory nature of the bishops visible.

Let's start with the former. What really stands out about the smog in our cities and because of these geographical and meteorological conditions of the air, for example, is currently in the Po Valley, which is something we have previously stated. In summary it can be said that the high Smog rating these days can not wipe out the fact that air pollution has declined steadily for several decades. Although the fine dust values ​​are at the moment over the limits, they are far below the values ​​that were a permanent condition 30 years ago. The current situation is due to exceptional weather conditions and, therefore, represents the exception to the rule. For two months it has not rained and the wind is calm. Therefore, the air is above the cities. That may be neither pleasant nor healthy, but is only a temporary condition that should not be overstated and should certainly not be used as an excuse for extraordinary measures. They will only cost the taxpayers a lot of money without bringing appreciable benefits.

The lies about the air pollution

But what do we see? Instead of mayors, governors and members of the government, explaining to the people based on concrete figures   what is going on, fears are enervated and scaremongering. There are full-bodied declarations, party political polemics and a cheap slugfest with views to the next elections. Then death statistics from air pollution pile into the house and the biggest bungler of all, the five-star comedian [Movimento Cinque Stelle, left-wing populist, Eurosceptic party] writes about the increase in deaths from pollution. In 2015 more than 70,000 people, more than last year, died in Italy. The lie is that it was linked to the air pollution, has been refuted by demographers Giancarlo Blangiardo which has unfortunately not put a stop to them.
The temporary air pollution in the major Italian cities could be compared with that of the early 50s.There were really Smog deaths. If things are really today, as currently claimed by climate hysterics, then perhaps anyone of them should perhaps explain why precisely Milan  has by far  the longest life expectancy in Italy.

Is air pollution good for health? Increased life expectancy in the cities clearly

Maybe we look at the tables of the National Statistical Office: in Italy in 2014, the average life expectancy for men was at 80.3 years, for women 84.9 years. In Milan it is as high as 81.4 years for men and 86.1 years for women. If we draw a historical perspective now, we see that the life expectancy in the past 20 years has risen in Milan for men by as much as seven years and for women by five years. In 1994, it was 74.2 years (men) and 81.3 years (women). Similar is the situation in Turin. For this industrial city the  surveys go back only since 2002. Back then, life expectancy was 77.1 years (men) and 83.1 years (women). Today it is 80.7 years for men and 85.2 years for women. Even Rome has the same development. The life expectancy has risen from 1994 until 2014 for men from 74.4 to 80.8 years and for women of 80.3 to 84.7 years.
Would that  we  thought like   the eco-ideologues, we would have to draw from these figures the conclusion that air pollution is good for the health. In reality, as the mere common sense suggests, things are naturally different in every way. The explanation for the rising life expectancy must be sought elsewhere. But for ecologists and politicians these simple panic messages seem to be a lucrative business when identifying and explaining complex processes that a general improvement in living conditions enabled (economic development, better food supply, better protection against heat and especially cold, access to better medical care etc). This includes new, environmentally friendly technologies, which in turn have improved the air values ​​and therefore our health.
This cycle must be understood that the continuing economic crisis could reverse this trend. The still unexplained increase in deaths in 2015 could be an indication. If this should be, then we would have to answer the call of climate hysterics: "Because of smog ..."

But we come now to the Church's representatives. Their current silence is suggestive, after an almost ecstatic intoxication at the world climate conference in Paris, where it seemed that the bishops wanted to outdo each other with dramatic statements and appeals. Where are the Monsignori who marched suddenly against climate change, held sermons about the alleged human-inflicted global warming and called on priests to give such sermons? Where are the prelates who spoke of the "last straw" in order to save the world? In those days there was not to be heard a discussion of  Smogalarm, which really has  a lot to do with the climate.  A decent rain or   a strong wind  would suffice and the matter would be downright washed and blown away.
One can also see the positive thing. By their silence they have at least spared us some of those unnecessary CO2 emissions. Perhaps we may even hope that one with some sense is  yet to come and will have put away the ideological phrases in favor of reality.

How would it be, to ask the Lord for rain?

Some rain or wind would be good not only for the residents of big cities, but also for farmers suffering from the drought. But none of the major prelates came to mind, where every simple country priest came immediately to mind earlier: to ask the Lord for rain. The Church even has ts own Masses providing  for such purposes. But who remembers that? These are irrational things for shamans and heathens, will be what many will think of them. It's inconceivable that an enlightened, post-conciliar bishop can believe in such things. For this purpose, he would have to even be aware that God is really the Almighty, as the true Lord of heaven and earth, the true creator of the universe, the earth and of man, a true master of nature, who has the power, as Jesus showed  his disciples several times,  to command the forces of nature.
But even in the Church there is the hybris that everything depends on the people and of what man does. "Only the man can still change," is what it surely must mean. For if a man does nothing, nothing happens. So also many prelates give  money instead for solar panels on the roof of the parish and speaks of a "prophetic" gesture," because that indeed is the the way that alleged  manmade   global warming is to be stopped.  Unfortunately it does not occur to begin a novena to St. Joseph or to celebrate Masses to solicit rain and wind.
* Riccardo Cascioli, chief editor of the Nuova Bussola Quotidiana
Translation: Giuseppe Nardi
Image: Meteostat (Screenshot)
Trans:Tancred vekron99@hotmail.com
Link to Katholisches...
AMDG
Posted by Tancred at 11:01 AM 2 comments: