(Cairo) In Egypt, the third assault has been directed against members of the Coptic minority since the beginning of the year. Security forces discovered the body of the Christian physician Bassam Sadouat Zaki.
On January 3, the Coptic merchant Youssef Lamei had been murdered in Alexandria. Only 48 hours later the corpses of the Christian couple Gamal Sami Guirguis and Nadia Amin Guirguis had been found.
The surgeon, Bassam Sadouat Zaki, practiced his profession in the city of Asyut in Upper Egypt, some 370 kilometers south of Cairo. According to the first surveys, he was stabbed with a knife on 13 January.
On January 5, the police discovered the corpses of the Coptic Guirguis couple. They too had been murdered by stabbing. As in the case of Zaki, the bloody act happened at home.The couple had been surprised with death in their sleep. The crime occurred in the governorate of Al-Minufiyya in Lower Egypt, 85 kilometers north of Cairo.
A few days ago some suspects were arrested. Neither the police nor the prosecutor's office wanted to provide more details.
Two days before the murder of the couple, the Copt Youssef Lamei had been murdered in Alexandria in the street where he was taking a break in his shop. While the authorities are silent about the motive  in the other two cases, the Islamic background of the murder in Alexandria is certain. The perpetrator shouted loudly, "Allah Akhbar" while he killed his victim with a sword before the horrified eyes of those passers-by and the inhabitants of the neighborhood.
Four murders within eleven days. Finally, on December 11, a brutal assassination attempt took place at the Peter and Paul Church in the district of al-Abbasiyya in Cairo. Directly adjacent is the Coptic Orthodox Patriarchate. On the day when the Muslims celebrate the birth of Muhammad, Islamists detonated an explosive device in a Coptic church, killing 25 Christians. The jihadist militia of the Islamic State (IS) has taken responsibility.
There is growing fear among the Christians of the country.
Text: Giuseppe Nardi
Image: Asianews
Trans: Tancred vekron99@hotmail.com
Link to Katholisches...
AMDG
Posted by Tancred at 4:25 PM 3 comments:

(Cairo) on Monday, July 4, a Coptic Christian was stabbed in Tanta (Gharbia Governorate) by Islamists and then beheaded.
The 33-year-old pharmacist and Coptic Christian, Magdy Attia, was lured with a medication order into a house and killed there. According to Egyptian media reports, the house is inhabited by Salafists.
Witnesses said they had seen Magdy Attila half an hour with two men outside the building in a lively discussion. Other witnesses reported cries for help, which came out of the house.
The body of the Coptic Christian was found with nine stab wounds and beheaded. Video surveillance cameras were recorded two men covered with blood who left the house. They were identified and arrested by the police.
The police did not have any further details about the background of the event. The arrested men are Muslims.
Egypt is currently beset by a new wave of anti-Christian violence. On Tuesday, a Coptic Orthodox nun was killed. According to police, it had been a "tragic accident". She had been killed  by an "stray bullet". A few days earlier the Coptic priest, Raphael Moussa, was killed on the Sinai Peninsula. The attack was acknowledged by the jihadist militia known as the Islamic State (IS).
The city Tanta in the Nile Delta is located approximately halfway between Cairo and Alexandria and has approximately 450,000 inhabitants.
Text: Giuseppe Nardi
Image: asenseofbelonging (Screenshot)
Trans: Tancred vekron99@hotmail.com
Link to Katholisches...
AMDG
Posted by Tancred at 8:53 AM 1 comment: 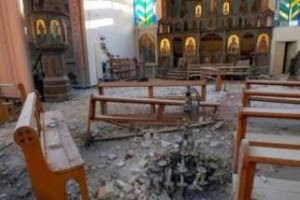 Cairo (AsiaNews / Agencies) - The Egyptian Coptic community faces a new escalation of attacks by Islamists. On 17 May, two churches were attacked with Molotov cocktails in the district of Dakhela, west of Alexandria, Egypt, and Menpal in Upper Egypt.

In Alexandria over 20 thousand Muslims attacked the church of St. Mary setting fire to the entrance of the building and shattering windows. A man died of a heart attack in the attack. In response to the violence, hundreds of Copts left their homes to create a human wall around the building. According to witnesses some Islamists armed with pistols and knives fired on the crowd, causing some injuries.

At the origin of the clashes is a dispute between two neighbors. Basem Ramzy Michael, a Coptic Christian, is reported to have behaved inappropriately towards the sister of Alloshy Hamada, a Muslim with a criminal record. In a short time the dispute between the two erupted into a sectarian clash.

A similar incident occurred last May 13, in the village of Menbal, Matay district, north of the province of Minya, where a Muslim mob stormed the church called the Tadros el-Mashreki and assaulted one person inside. The assailants threw stones at the building, looted Christian shops nearby and burned cars. The Coptic minority has been threatened with expulsion from the village. Once again the violence was sparked by a trivial quarrel between two young people. Some young Muslims are reported to have made advances to a group of Coptic girls, as they entered the church. Irritated at having been ignored the group waited for the young Christian girls to leave the Church and threw bags filled with urine at them. The young people were rescued by some Christians peers who have started a heated argument with Muslims. As in other cases, the news spread across the village. In a short time a crowd of Islamists rallied in front of the church, forcing young people to take refuge inside.

Ehab Ramzy, a Coptic Christian, prosecutor in the province and former member of parliament, said Menbal has a Muslim majority, while Manshiet Menbal, 10 kilometers away, has Coptic majority. "The Christians of the two villages - he explains - have nothing to do with the fight that took place in Manshiet Menbal. The young people were attacked just because they are Christian." Two young Muslim men were arrested by police in Menbal. In the coming days there will be a reconciliation meeting between the two communities. "Now - he adds - the security forces are trying to arrest some young Copts. They have become a bargaining chip to seek reconciliation."

AsiaNews sources underline that the attacks against the Coptic community are now a daily occurrence and are being ignored by the police, who because of the climate of chaos, let communities resolve disputes among themselves, although this can result in dead or wounded. The most serious incident took place on April 7 in front of the Cathedral of St. Mark in Cairo, where a group of Islamists attacked funerals of four Christians killed in sectarian clashes that took place on April 5 in the district of Khosous, on the outskirts of the capital, with stones and Molotov cocktails. The assault, which took place before the eyes of the police, left two dead and over 80 injured. A church building caught fire.

Posted by Tancred at 9:11 PM No comments: