Edit: the parade is so bad even a professional mourner like Bill Donahue is moved to complain about something worth complaining about. That groups promoting sexual immorality are invited while those defending the unborn are banned.

Notice this article ends with Cardinal Dolan complaining about secular forces which, like it or not, he serves when he allows the parade to be abused by the proponents of gender ideology.  It's so typical of the Register.

Complain though the Cardinal might about secularism, he's still caved to the consensus and is causing scandal by allowing organizations that promote sexual immorality in what is supposed to be a Catholic parade. Is he not the Gay Grand Marshal?

NEW YORK — When the New York City St. Patrick’s Day Parade kicks off at 11:30am Thursday, two homosexual groups will be among the hundreds of organizations marching under their own banners.
No pro-life organizations, however, will be marching in the annual parade down Fifth Avenue.

“You have a gay group in the St. Patrick’s Day Parade allowed to march, but the pro-life people are banned? The whole thing is perverse,” said William Donohue, president of the Catholic League for Religious and Civil Rights.

http://m.ncregister.com/daily-news/nycs-perverse-st.-patricks-parade-will-feature-gay-groups-but-not-pro-life/
Posted by Tancred at 4:35 AM 12 comments: 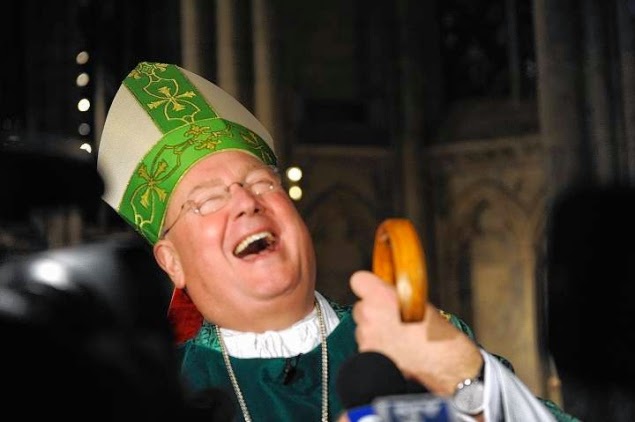 Edit: we can just imagine Cardinal Dolan drawing a forefinger across his neck and motioning his lavender thugs to usher Catholic journalist Michael Voris out of the press room.