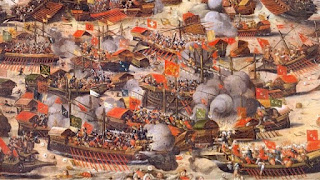 (Rome) The Rosary Festival (Festum Beatae Mariae Virginis a Rosario) was held yesterday, which was originally the Feast of Our Lady of Victory. It was introduced on the occasion of the naval battle of Lepanto against the Turks on October 7, 1571, which was victorious for Christendom. The Feast was already established in 1573.

It has  not yet been confirmed yet that yesterday a flash of lightning had hit the dome of St. Peter's in Rome, as on the evening of February 11, 2013, when Pope Benedict XVI unexpectedly resigned.

Email ThisBlogThis!Share to TwitterShare to FacebookShare to Pinterest
Labels: Rosary

Pope Francis to the Portuguese: "Pray the Rosary Every Day" 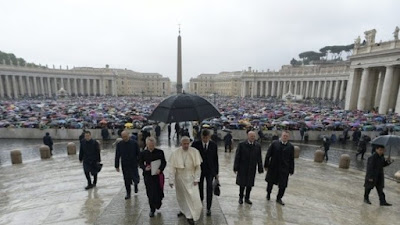 "This month of Mary invites us to reinforce the honor and discipleship of Our Lady Daily. Say the Rosary every day! Let it be that the Virgin Mary occupies your own heart, trust her with what you are and have! And God will be all in all. So God bless you and your loved ones!"

This request was presented at the Jubilee Audience last Saturday, May 14 from an employee of the Pope only in Portuguese.
Image: vatican.va/OR (Screenshot)
Trans: Tancred vekron99@hotmail.com
Link to Katholisches...
AMDG
Posted by Tancred at 9:32 AM 14 comments:

Peru: The Rosary as an Answer to Homo-Protest

At the Cathedral of Lima a "kiss-in against homophobia" was planned, and about 200 Catholics were there in peaceful prayer.

Lima (kath.net) Hundreds of Peruvian Catholics gatheredd last Saturday in front of the entrance of the Cathedral in the Capital, Lima:  They prayed the Rosary together as an answer to a "Kiss-in against homophobia", which was hald by a small homosexual group only a few meters from the church.  This was according to CNA.

This was the second "Kiss-in" of the group.  At the first occasion, a few weeks before, they were removed from the entrance of the Cathedral by the police.  This time the Group had permission from the Mayor of Lima, Susana Villaran, who has already made her support for expressions of homosexuality known on a number of occasions.  Although this second "Kiss-in" was very heavily reported by the media, only eight persons took part in it, three couples of males and one female pairing.

As an answer to the planned and broadcast homosexual event there were some 200 Catholics in front of the Cathedral who formed a kind of human chain aroud the church.  They peacefully prayed the rosary and sang religious songs.

Daniel Torres Cox, who had come to the prayer, told ACI Prensa:  "We are simply here to defend our faith in some way."  He described the homosexual protest  "an attack on that which we believe and that is the reason why we're here in order to protect it."

Homosexuals in Peru "provoke us, because the Catholic Church represents everything that they want to destroy," said Nancy Freundt of Zentrum for Natural Family Planning.  "The Catholic Church is not made of adobe bricks.  The Church is made of all Catholics who understand and believe their faith."

A more recent poll was published indicating that 75 percent of Peruvians are against "homosexual marriage".  The Peruvian Congress even declared, that which is also in the Constitution of the Land, that marriage is a bond between man and woman.

Kath.net original, here...
Posted by Tancred at 8:59 AM No comments:

It Was the Rosary: Mainz Priest Talks About Vocation

The mixed marriage of parents of the well-known Mainz Priest, Father Hendrick Jolie, produced an alienation from religion in his family. But suddenly, everything changed and nothing was the same as it was.

[kreuz.net] I was not "unpious" as a young person, explained the well-known Mainz Priest, Father Hendrick Jolie, in an interview today with the Linz site 'kath.net'.

The clergyman came from a mixed marriage. "It created a kind of distance from the Church," according to him.

Then suddenly came the change: "the transformation of my Father's conversion in the 80s had deeply influenced me."

The future priest started to pose new questions: "how can a man, who is the business manager of a large convenience store chain standing in the middle of the profane world, suddenly become so pious? Why did he pray the rosary and go to Holy Mass [sic] so often?"

The example of the Father spurred the son: "I began in any case, to regularly pray the Rosary."

Because of that the life of the future Priest changed in a few months "fundamentally":

"I gave up my original career plans and entered the seminary in 1985."

Fr. Jolie didn't have a doubt: "Today I am absolutely sure, that I have the Rosary to thank for my vocation."