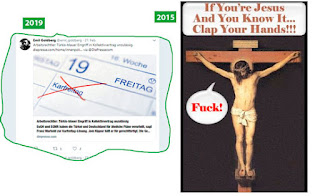 Strange. That anti-clericals from the SPÖ [Socialist Party Austria] and trade unions suddenly fight for Good Friday as a holiday, although they first supported the lawsuit in the European courts, which was directed against the favored holiday arrangements for Protestants. Logical consequence: The alleged factually unjustified leave of absence is to end.

How honest the concerns of the SPÖ and the union are, is shown by the example of Emil Goldberg, from the twitter account "Informationshandwerker für @spoe_at and @ SCHIEDER".

On the twitter account of Emil Goldberg, then as today (Jewish) member of the SPÖ, there is Christ mockery believed extinct since the Nazi era (top right picture).

The judiciary makes an offer to Emil Goldberg to avoid criminal prosecution:

The Federal Police of Vienna Have filed against you a preliminary investigation for the offense under § 188 StGB. Accordingly, you are under suspicion. You publicly posted a picture of the crucified Jesus on Twitter on April 3, 2015, saying, "If you're Jesus and you know ... Clap your Hands," which person is the subject of the worship of one in the nationally existing churches, degraded by posting this.

If you file an expense contribution for the costs of the proceedings in the amount of 90.00 EUR within 14 days of service of this notice, you will not be prosecuted for the charge. Account: Provincial Criminal Court Vienna

Emil Goldberg denies the prosecution's letter, "Jesus joke costs $ 90, ‘expense contribution’, and I have to be good for a year now. Alright. Nevertheless, a farce," can be found on twitter @ emil_goldberg (October 30, 2015).

Mind you: It was an expense for the Christ mockery, but no fine!

Only after a press query with the public prosecutor's office in Vienna was the application for punishment for disparagement of national religious teachings with the district court Döbling. For now, however, under a faulty continuation request.

No procedure at BG Döbling

At our request for the continuation of the proceedings, the head of the district court, Dr. Ing. Barbara Helige, granted that this procedure would certainly not be negotiated at the BG Döbling: It was not responsible.

"In the criminal case against Emil Oliver GOLDBERG for the offense of degrading religious doctrines according to § 188 StGB in connection with § 1 Abs 1 Z 12 MedienG the criminal complaint of the public prosecutor of Vienna from 13.04.2016 in accordance with § 485 Abs 1 Z 3 in conjunction with § 212 Z 1 StPO rejected and closed the case.” (twitter" Emil Goldberg "on May 30, 2016

"The readership of Twitter messages, including those who are being incriminated, include people from all walks of life who are interested in the personal opinions of individuals, organizations, businesses and celebrities on an unlimited number of topics. The only prerequisite is Internet access, so that the readers are mostly younger persons and persons who are experienced in dealing with modern media.

The reader from the aforementioned circle of readers summed up the incriminated tweet, especially in connection with Good Friday, in such a way that the defendant has a critical attitude towards religious communities, in particular the Christian denomination, and wants to shake up believers with his publication and start a discussion process by mocking one person, Jesus, and a symbol, namely, his crucifixion, worshiped by followers of Christian doctrine. The aforementioned readers see in the incriminated publication no factual statement, but see it as a valuation of the defendant, who would like to express his personal disregard of the mentioned religion in the form of satire. In particular, the inserted speech bubble with the words "Fuck!" clearly expresses to the reader that now Jesus Christ realized that his sacrifice was not a good idea for humanity.

Another characteristic of satire is the lack of seriousness of said depiction. This was also in connection with the follow-up tweet, which focused on the then well-known discussion of a statement by a former Justice Minister. Rather, it is therefore a provocative statement expressed in the form of art, at best the depreciation of a central person of the Christian faith, which, however, is not suited to provoke legitimate annoyance within the meaning of Section 188 of the Criminal Code. Thus, the defendant's tweet may well be considered a provocation of a person critical of religious sensibilities, especially given the timing of the publication, namely on a Good Friday, but this statement remains under the threshold of a punishable act and, in the absence of direct attack on a religious community in the framework of the right to freedom of expression, because an account such as this never triggers a profound (negative) feeling on the part of the average person or average member of the "challenged" religious community. "(Quoted from https://twitter.com/emil_goldberg/ status / 737207480804118528 / photo / 1)

Just two weeks later, Dr. Alfons Adam, founder of the "Christian Party" and committed fighter against abortion killings, was convicted of the same § 188 StGB by the Vienna Regional Court, although he did nothing but to co-copy a pamphlet with quotes not doubted by the court, from the writings of Buddhism and  to reprimand the Dalai Lama for contacts with former Waffen SS members and his foreword to a book by a representative of racial doctrine. The prosecution also involved the Regional Court of Krems (sentencing abrogated), the OGH and the Higher Regional Court of Vienna, as well as the General Prosecutor.

Trans: Tancred vekron99@hotmail.com
AMDG
Posted by Tancred at 8:31 AM 1 comment: