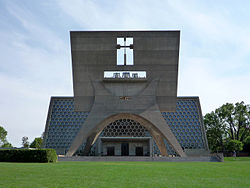 Edit:  As if to demonstrate how deep the rot has entered, 143 faculty members from two affiliated "Catholic" schools have signed a document effectively rejecting the definitive teaching of the Catholic Church.

Will they get away with it too?  Maybe it's ok when Leftist faculty are openly disobedient?  In fact, St. John's University and St. Benedict haven't been Catholic in many years.

These institutions and their employees seem emboldened in light of the Abbey's own attempt at neutrality, to make a more definitive public statement in favor of what the Catechism of the Catholic Church has described as "intrinsically disordered".  The Archbishop has asked for obsequy from his priests and religious and has even forbidden the openly disobedient priest, Bob Pierson, from speaking in his Archdiocese.

The undersigned below,  constitute a substantial number of faculty members at Collegeville and St. Benedict's Benedictine Nunnery, seem convinced that their rebellion will have no consequences.

Note the faculty members who are in the Theology Department.  This kind of dissent from Catholic teaching doesn't grow up over night and has been going on for decades with the collusion of the people who continue to support this Monastery gone wild, as Lifesite News so aptly put it this summer.

Of course, they are insisting that "new scientific" knowledge has thrown light on this issue which we are obliged to obey, although they haven't effectively demonstrated how that is supposed to work.  What it is is plain modernism.  More ironic still since there is no scientific research supporting their claims underlying their support for gomorrist weddings.  On the contrary, there's an enormous amount of "scientific" evidence against such unions.

The Bishop's statement as follows:


We, the Catholic Bishops of Minnesota, believe it is critical in our time to speak in support of marriage as a lifelong commitment between one man and one woman in an enduring bond of love. God’s word in divine revelation declares that marriage is a union ordered to both the mutual good of the spouses and to the procreation and raising of children. As a sacred institution, marriage is a constant reminder of God’s love for the human race, as well as a reflection of the permanent, faithful, and fruitful bond of love between Christ and the Church. (See Genesis 1:27, 2:22-24; Ephesians 5:31-32.)

Our own State’s constant recognition of marriage is based on the evident fact that only the sexual union of a man and a woman has the natural capability to bring forth new life with the bearing of children. Both faith and reason agree, then, that marriage is an institution central to the life of human society, and touches profoundly on the common good. This committed relationship between one man and one woman calls forth the best of the spouses, not only for their own sake, but also for the well-being of their children and the community. It is neither possible for us to change the definition of marriage nor wise to attempt to do so.

We urge our State government, our fellow Catholics, and all people of good will in the State of Minnesota to support marriage, both in theory and in practical measures that safeguard, promote, and enhance marriage and family. One practical measure would be a constitutional amendment defining marriage as a union between one man and one woman. For further reading, see: Marriage: Love and Life in the Divine Plan, by the United States Conference of Catholic Bishops, 17 November 2009. See also the web site at www.usccb.org/issues-and-action/marriage-and-family/marriage/love-and-life/index.cfm


Here are the names of many people who are against the Archbishop's proposal and the Catholic Church's moral teachings, link, and we've highlighted the ones who are in the "Theology" department.  Shouldn't someone who so violently challenges the authority of the Archbishop and the Church's teachings have their licentiate to teach theology revoked?