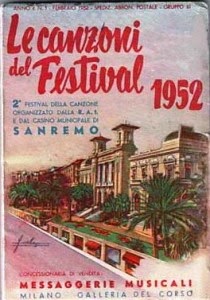 (San Remo) From the 10th-14th February the 65th Festival della canzone italiana will be held in  San Remo. Italy's most popular event of  light music is being broadcast by the Italian state radio RAI. Conditions of participation: All songs must be sung in Italian. Recently, however, the festival is becoming a stage for the gay indoctrination.
The gender ideologues have tried to capture  the festival for several years. Since this is an event by public television, it is not possible without political support.
2013 It "pleased" the organizers to broadcast an "anti-homophobia" commercial.
2014 San Remo Festival was "the scene of an outrageous gay appearance" says Corrispondenza Romana. The largely unknown, but all the more perverse Canadian singer Rufus Wainwright, who sings  obscene and blasphemous songs like "Gay Messiah" or "Baptist", was invited for a guest appearance. In the song "Gay Messiah" the aberrosexual singer announces the coming of a deviant "Messiah", "who comes from a porn movie of the 70s". Wainwright even appears  as a "homo-Messiah" on stage and is "crucified". In the song "Baptist" the Canadian sings acting out  perverse fantasies of a baptism by sperm. In 2012 Wainwright concluded a "gay marriage" in New York  and announced that a friend would  carry a child as "surrogate mother".
Since moderator Fabio Fazio was to make his appearance, who is known for his radical left-wing activism, protests from the audience and the Italian Association lawyers for the life were of no avail. The organizers stuck to Wainwright.

In 2015, the Austrian aberrosexual Thomas Neuwirth, also known drag queen "Conchita Wurst" will appear as a guest star in San Remo. Although the Festival 2014 was a flop in  audience attendance, which is why Fabio Fazio was replaced by  moderator Carlo Conti, but with the lavender agenda, nothing changes.
"Würst" is the product of a deliberate homosexualization made possible with public funds. ORF 2013 ignored the usual disapproval of the audience  preliminary and unilaterally appointed the mediocre singer as the Austrian representative at the Euro Vision Song Contest. There he was, despite a meager musical performance and audience, an allegedly "miraculous" decision to appoint the winner of the 59th edition of the Grand Prix Euro Vision Song Contest. "Würst" sees himself as a fighter against "discrimination" against aberrosexuals.
The bearded "woman" has since been passed around as a "man of the hour". Since  television stations can hardly tear  his musical performances from the Styrian world, there are  motives that give him invitations upon invitations, they must look elsewhere.
To show that Italy also can produce the new gender-neutral unisex chimera, Mauro Coruzzi was also invited, who is also known as Platinette, who has appeared already, dressed in an evening gown as a drag queen and appeared normally dressed at another evening. Is the Festival of San Remo to be a stage of dubious sexual fantasies and disturbed identities?

The gay indoctrination by the state television RAI has caused considerable protests this year among Catholics. A number of websites at the Catholic Counter-Information have called for a boycott of the festival. The Association of Catholic viewers Aiart said: "The decision to invite the drag queen Conchita Wurst,  who is to  receives a lush 120,000 euros, proves once again that the RAI does not want to invest in the quality of  music, and decent performances, but public money for doubtful guests to produce an ideological program."
Text: Giuseppe Nardi
Picture: San Remo Blog
Posted by Tancred at 10:10 AM 7 comments: