Greg Burke did not want to comment on the circumstances

Vatican City (kath.net/KAP) According to Italian media reports, a high-ranking Swiss employee in the Vatican has been dismissed by the personal intervention of Pope Francis. It was Eugene Hasler, secretary of Bishop Fernando Vergez Alzaga, the second man in the Governorate of the Vatican, onlinemedia reported on Thursday. The motive for the unusual papal intervention was to be internal tensions. Hasler appears to have an authoritarian style. The layman Eugene Hasler is the son of the former major of the Swiss Guard, Peter Hasler. His father served 42 years in the papal guard.

The Vatican confirmed Hasler's departure. Greg Burke did not want to comment on the circumstances. Hasler has not been working in the Vatican for a week, says Burke. Hasler's mother Maria Michela Petti, according to the reports, said that her son had not yet received a letter of dismissal.

The governor is responsible for the infrastructure of the Vatican, from the post office to the nursery. It is often referred to as the government of the smallest state in the world. At the top is the Italian Cardinal Giuseppe Bertello. The Spanish Bishop Vergez, the immediate superior of Hasler, as general secretary, is a sort of deputy head of government. 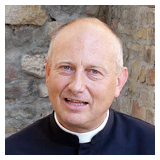 Edit: this was announced on Tuesday,  20. Dezember 2011 at 20:00 hours on the German Website.  He is replacing Father Davide Pagliarani who has moved to Argentina.

Father Pierpaolo Maria Petrucci has been named by the General House as the new Superior of the Italian District of the Society of St. Pius X. Father Petrucci was born in 1962 on the Adriatic coast in Rimni.

In 1981 he graduated from High School and enter the Priestly Seminary of Econe. Six years later he was ordained a a Catholic priest by Archbishop Marcel Lefebvre. At first he was active for five years as an educator at the Boys Gymnasium "Etoile du Matin" in Bitche (Lothringen).  Then he was a Director of Spiritual Excercises in Italy from  1993 as pastor in various priories in France (Priory  "St. Regis" in Unieux near Lyon, then Prior of St Louis in Nantes in der Vendée). In 2005 he was the Prior of the Priory of Nantes, the largest operation in the Society after Paris, and Dean of the Society for northwest France.  In 2008 he returned back to Italy and took over the priory of "Our Dear Lady of Loretto" in Rimni at the request of the District Superior.

Link to Society Webpage for Germany...
Posted by Tancred at 3:13 PM No comments: