(Rome) On Palm Sunday, Pope Franziskus celebrated  the Liturgy of the blessing of the Palms, and Holy Mass on the St. Peter's Square in Rome - and knelt down.
When the Passion story was sung, when the words came, "But Jesus cried aloud. Then he breathed out the spirit," all knelt down in memory of the death of Jesus Christ. Pope Francis, too, knelt on a knee-stool prepared for him.
This is to be reported, because the missing kneeling of the reigning pope before the Most Blessed Sacrament was recently discussed in some contributions with a view to the forthcoming Holy Thursday. The kneeling in remembrance of the crucifixion of Christ is a deep reverence. The kneeling before the real presence of Jesus Christ in the Sacrament of the Altar, and as the highest form of expression in the worship of the most sacred, is another stage of worship.
Text: Giuseppe Nardi
Photo: CTV (Screenshot)
Trans: Tancred vekron99@hotmail.com
Link to Katholisches...
AMDG
Posted by Tancred at 4:08 PM 11 comments: 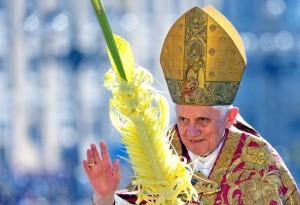 In the booklet for the solemn Pontifical Mass for the inauguration on 19 March was expressly noted that the Pope after the elevation "kneels in adoration." Pope Francis occurred yet, as previously, only one bow. Also in the magazine for the Palm Sunday liturgy is again recorded in both places that the Pope after the conversion words "kneels in adoration." For this too must a physical disability will be accepted which makes a genuflection possible, especially since the genuflection is prescribed and Pope Benedict XVI. is able to execute it despite his almost 86 years and his painful hip problems. A simple explanation by the "Newsroom" of the Holy See would provide clarity.
"Even if the Pope does not sing and can't kneel down, this is not to say that the priests should imitate him in it,” said Cantuale Antonianum because the papal liturgy should generally be a role model for priests. "Human limitations should not be a reason for others to liturgical fractures. It's not about a question of style, but the substance,“ said the website, which is mainly dedicated to questions of liturgy and church music.
On Palm Sunday again, the antiphon Pueri Hebraeorum will be sung during the procession on St. Peter's Square. "A beautiful example that should be imitated in the parishes .” The following is the recording  from the Palm Sunday  procession in 2011 The verses are sung in Italian.
Link to Katholisches….
Posted by Tancred at 10:10 PM 4 comments:

Palm Sunday: The 90th Anniversary of the Emperor's Death

He came unto his own and his own received him not. -The Apostle John

That the 90th anniversary of his death fell on the same day as Palm Sunday this year is filled with a beautiful symbolism as the secular ruler, takes on the mantle of his master.  From Dom Gueranger's Liturgical Year.

The miracle performed by our Saviour almost at the very gates of Jerusalem, by which He restored Lazarus to life, has roused the fury of His enemies to the highest pitch of phrensy. The people’s enthusiasm has been excited by seeing him, who had been four days in the grave, walking in the streets of their city. They ask each other if the Messias, when He comes, can work greater wonders than these done by Jesus, and whether they ought not at once to receive this Jesus as the Messias, and sing their Hosanna to Him, for He is the Son of David. They cannot contain their feelings: Jesus enters Jerusalem, and they welcome Him as their King. The high priests and princes of the people are alarmed at this demonstration of feeling; they have no time to lose; they are resolved to destroy Jesus. We are going to assist at their impious conspiracy: the Blood of the just Man is to be sold, and the price put on it is thirty silver pieces. The divine Victim, betrayed by one of His disciples, is to be judged, condemned, and crucified. Every circumstance of this awful tragedy is to be put before us by the liturgy, not merely in words, but with all the expressiveness of a sublime ceremonial.

Photo credit: Roman Christendom
Posted by Tancred at 8:06 AM No comments: