(Warsaw) For almost 250 years,  there has been  an ongoing attempt to banish faith from public life. It is tolerated as a private expression, but not as a public confession. All the more  disturbing then is the public confession of a statesman. Poland's new President Andrzrej Duda, elected on Whitsunday, is already overwhelmed in the international press with negative headlines, even before he has taken office.
La Repubblica, the "broad sheet" of Pope Francis, the only daily newspaper, which the Catholic leader reads   every morning, has described the choice of Catholic Duda as "a terrible shock", the "Polish Dossier fits to Europe's other nightmares".
Andrzej Duda is really a practicing Catholic. Barely elected, he went to Czestochowa ,, the Polish national shrine,  to the Queen of Poland    to kneel r for all to see before the Black Madonna  praying for  and asking counsel in his responsible office. 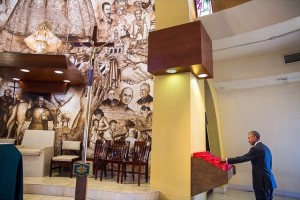 Obama Lights Candle in  Catholic Church
When politicians make pious gestures, then  sometimes there underlies political calculation or provocation. Christians are aware of this ambivalence which plays into the  arms of whoever want to banish Christianity in the private closet.
There are pretty embarrassing  images of US President Barack Obama, from which one does not even know what Christian denomination he belongs or whether he belongs to one. On May 28th, he attended the influential Cuban exile Community  in the United States in the context of rapprochement between Cuba and the United States. Not all of them will see the resumption of normal relations with a benevolent eye, as long as the Castro brothers and the Communist Party in Cuba have the final say.
Obama ostentatikously visited on this occasion   the Catholic Church Our Lady of Charity in Miami (Florida), the "National Church" of Cuban exiles, and lit a candle by the sight of an image of Mary, the Mother of God.  That can't  hurt,  is what the powerful master in the White House himself  may have thought. Pious gestures are  hardly credible acts.
Austria's Catholics got on a roller coaster of emotions from the Christian Democrat Minister of Agriculture and Environment,  Andrä Rupprechter of the ÖVP. At his swearing-in, he said, unlike his Social Democratic Minister colleagues, not only the formula "so help me God", but added  his own "and in front of the Sacred Heart of Jesus Christ". Unbelievers as the devout Austrian marveled not a little. Should there still be politicians who do not leave their faith in the cloak room of the antechamber of parliament and government and feel obliged to  commit themselves in their  political decisions to their faith?
Less than four months later, the same Christian Democrat again drew attention, but this time with quite unchristian demands for the legalization of gay marriage and the possibility that homosexuals could adopt children. Finally, it turned out that the Minister with black party membership was a convinced Trotskyist in recent years. Whether the bigotry a one-time mistake or a belated antichrist Trotskyist provocation was present at the swearing in, remains a mystery to the Minister.

The first three actions of the new Polish president

Andrzej Duda is not Obama. The representative of the Christian Poland sat immediately after his election "out of conviction" ( tempos ) three acts.

He rose to Jasna Gora, the Klarenberg, to thank Our Lady of Czestochowa for the victory and to offer Her his office.
He visited the grave of Witold Pilecki, who voluntarily went to Auschwitz in order to organize resistance against Nazism among the prisoners. After the war he was tried and executed by a communist People's Court to death.
He visited the grave of Lech Kaczynski, the 2010 who was the Polish President who died in a plane crash,  with whom he had begun his political career and today in Poland is  a symbol of an independent Poland, which has freed itself from  Russian domination, but  neither is patronized by  the EU  with an anti-Christian agenda or is want to be a pawn of unlimited financial speculators.
President Duda emphasized during the election campaign "the specificity of Poland, its traditions and its Christian roots" that are "essential" for him for a recovery and a revival of Poland.
What specific, trendsetting circles outside Poland consider of  the new Polish head of state, has become well known through the media.
Text: Giuseppe Nardi
Image: Mil / CNS
Trans: Tancred vekron99@hotmail.com
Link to Katholisches...
AMDG 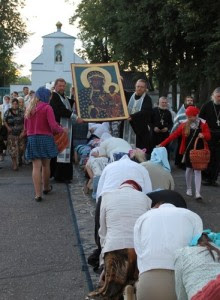 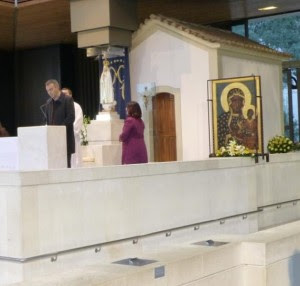 Anniversary of The Miracle on the Vistula: Poland Defeats the Red Army in 1920

Edit:  Today is the anniversary of the first day of the Battle of Warsaw wherein the Poles, under the cautious but inspired leadership of Józef Piłsudski drove back the Red Army at the gates of Warsaw. A poorly equipped but motivated Polish Army won out against the odds and expectations of their European supporters.  This victory was the fruit of brilliant planning on the part of the Poles and granted to them by Our Lady as many Poles went to the Monastery of Czestochowa to get intercession:

When the Russians were at Warsaw's gates in 1920, thousands of people walked from Warsaw to Czestochowa to ask the Madonna for help. The Poles defeated the Russians at a battle along the Wisla (or Vistula) River. Today, every school child knows the victory as "The Miracle on the Wisla."[here]

This great victory is also the subject of a new film set to be released in October by Jerzy Hoffman.  In contrast to his other films, the famed Polish director now has an opportunity to portray the Russians as the enemy, which he avoided doing in his earlier dramatizations of Henry Sienkiewicz's Trilogy.  It's amazing what not having a few Soviet Shock Armies at your doorstep will do for artistic freedom and the Catholic faith.  This film has a notable religious dimension and underscores Poland's growing religious feeling.