Oldest Frescoes of St. Benedict Rediscovered in the Ruins of Norcia Monastery

(Rome) The heavy earthquakes that shook the birthplace of Benedict of Nursia in the late summer and early autumn of 2016 also brought down the consecrated basilica in Norcia's city center. In the rubble, the oldest fresco of the ba
silica was discovered last month.
It is a representation of the saint who founded the Benedictine order in the 6th century. "Due to the collapse caused by the earthquakes, the image came to light," said the Director of the Heritage Office of Umbria, Marica Mercalli. "At present, the collapse-endangered parts of the wall are being cleared away in the transept."

"The fresco is of great importance. It was discovered last March by the prior of the Benedictine monastery of Nursia, who also bears the significant name of Benedict. Now we were able to document it in all its beauty," says Mercalli.
The Benedictines knew nothing of this fresco before the earthquake. It only shone from the rubble of the church. "The discovery is a valuable sign for us," said the Prior.
After Napoleon had expelled the Benedictines from the birthplace of their founding father, the first return of monks took place in Holy Year 2000. It is an Old Rite convent that revives the Benedictine tradition in Norcia.
The monastic community lost everything in the earthquake, the monastery and the church. The basilica had been given to them by the local bishop of Spoleto for pastoral care, but also as convent church. In recent years, the monks gradually took the necessary steps for the celebration in the traditional form of the Roman Rite of restoration, as the basilica was up to the liturgical reform of 1969.
With the reconstruction of the basilica after the earthquake, however, the church was deprived of them again by the new local bishop, because he wants to rebuild the ruined church as "modern." This would be make its further use by the monks impossible anyway. The monks accepted the decision in humility and did not say a word about it. Others speak of an "unfriendly" act of the bishop, especially since the funds for the reconstruction were promised by the Italian Prime Minister.
The monks lived in tents after the earthquake. Meanwhile, they were able to build an emergency monastery and an emergency church made of wood, which were consecrated on the Feast of the Holy Cross.
Text: Gi useppe Nardi
Image: Nebbie del Tempo (screenshot)
Trans: Tancred vekron99@hotmail.com
AMDG

Basilica of Nursia: Winning Back the Presbyterium for the Old Rite 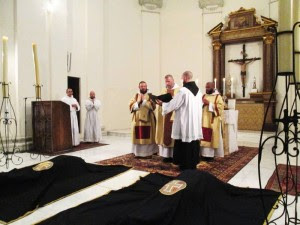 (Norcia) The photo gallery shows the gradual rebuilding of the chancel of the Basilica of Nursia, which has been supervised by the revived Benedictine Abbey since 2001. The American Benedictine Dom Cassiano Folsom, realized the re-establishment of a monastery twelve years before in the Abbey birthplace of monastic Father Benedict of Nursia and his sister, Saint Scholastica. The monastic life was strangled there in 1810 by Napoleonic legislation. In 2000 the Archbishop of Spoleto-Norcia offered an invitation to Cassiano cathedral, to resume the Benedictine tradition in the central Italian city.

The Benedictine convent is biritual. Internal monastery only maintains the traditional rite, while for the pastoral care the Novus Ordo is celebrated. The request of the abbey to the Pontifical Commission Ecclesia Dei, to celebrate the Holy Mass in Utroque Usu was approved in 2009. The Benedictines of Norcia emphasize a liturgical apostolate in the Old Rite.

The Benedictines currently live in Nursia, where they are plagued by lack of space. Therefore, they work on gradual reconstruction of ancient monastery ruins outside of Nursia, which will house the abbey in future.

The Benedictines of Norcia have worthily transformed the presbytery, despite only modest resources that are available to them. The first picture shows the presbytery of the basilica after the liturgical reform. The second picture shows the first stage of the liturgical restoration at the solemn vows of a monk. The direction of celebration was changed to ad Deum. The third picture shows the second stage of the liturgical restoration of the the extension of the chancel and nave, with ceremonial vestments, showing the facing the apse, and altar in the direction of celebration ad Deum, apsewards towards the rear wall, which was also redesigned solemnly. The picture was taken at the solemn profession of two monks from the monastic community was celebrated this past 3rd of August. 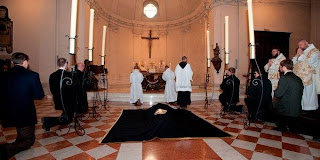 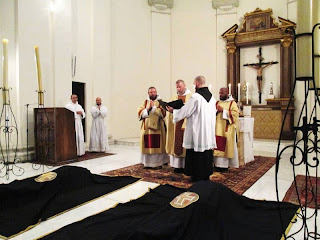