Archbishop Dolan tries to get Youth involved with Indifferentism 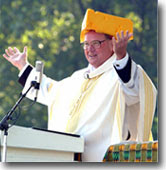 Two of New York’s most respected spiritual leaders joined hands on Nov. 5 at Fordham University, calling for an active intra-religious agenda to combat the world’s ills and to strengthen young adults’ engagement with their faiths.

Archbishop Timothy M. Dolan, the leader of Archdiocese of New York City, and Arnold M. Eisen, Ph.D., seventh chancellor of the Jewish Theological Seminary, acknowledged a secular crisis that sees generations of faithful teenagers and young adults in America drifting away from the religions of their birth.

Quoting from a United States survey released last year by the Pew Forum on Religion and Public Life, Archbishop Dolan said the Catholic Church is retaining about 68 percent of its members, while the Jewish faith is retaining 76 percent.