Trans: Tancred vekron99@hotmail.com
AMDG
Posted by Tancred at 8:59 AM 1 comment:

(Rome) Naples archbishop, Cardinal Crescenzio Sepe, has commissioned the Institute of Christ the King Sovereign Priest (ICRSS) the task of celebrating the Immemorial Mass of All Ages in the diocese and to take over the pastoral care of the faithful of the old rite.
The celebration of Holy Mass will take place Sunday and Feasts at at  6 o'clock in the Church ofthe  Arciconfraternita Santa Maria del Soccorso, the Archconfraternity of Mary Help of Christians, in the district of Arenella. The church is not to be confused with the parish church, which is a few meters away.
The Institute of Christ the King Sovereign Priest has sent two canons, Father Louis Valadier and the new priest, Father Florian Braun to Naples to meet with the Archbishop's request. Today, on the feast of Saint Januarius, the patron of Naples, the two priests took up their pastoral work.
With the appointment of the priests also ends the previous summer break in the celebration in the traditional rite, which was set for two months. It's a victory, and the faithful are very relieved as the Coetus Fidelium of Naples has announced.
The new Canon was ordained in 2012 for the Institute of Christ the King. Most recently he was scholastic and choirmaster at order's own seminary in Gricigliano in Tuscany. Canon Florian Braun is a very new priest, who was ordained last July along with another ten candidates for the Institute of Christ the King and Higher Priest.
The Church of the Confraternity was, after the publication of the Motu Proprio Summorum Pontificum to become the home of the faithful of the Roman Rite. The church is located in its pristine state. In contrast, the high altar dating from 1607 was demolished in the nearby parish church during the post-conciliar liturgical reform.
In the city there are three more Mass locations in the traditional rite according to the Motu Proprio Summorum Pontificum. Nowhere, unfortunately is the traditional rite allowed at a reasonable time on Sunday morning.
Text: Giuseppe Nardi
picture: Francesco De Filippo (Screenshot)
Trans: Tancred vekron99@hotmail.com
Link to Katholisches...
AMDG
Posted by Tancred at 6:42 PM 6 comments:

Email ThisBlogThis!Share to TwitterShare to FacebookShare to Pinterest
Labels: Cardinal Crescenzio Sepe, Immemorial Mass of All Ages, Institute of Christ the King, Naples 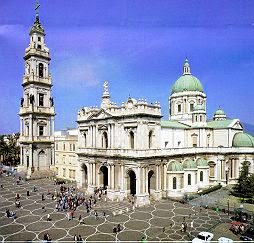 (Rome), a new blow by  the Commission  set upon  the  Franciscans of the Immaculate by the Congregation for Religious. The lay association Mission of the Immaculate Mediatrix (MIM) was denied the Marian Sanctuary of Pompeii.  Since the year 2004, MM brought believers together to  take a pilgrimage from Naples and Campania  to the Shrine of Our Lady of the Rosary in Pompeii, the most famous Marian shrine in this part of southern Italy. Yesterday, on Divine Mercy Sunday, however, the faithful were denied  access to the holy image

Prohibition of Commissar Volpi Led Prelate of Pompeii to Ban

On 10 April, when everything was already organized, the faithful were informed by the rector of the Basilica, Monsignor Salvatore Acampora,  the use and access ban without notice. Pilgrimage, Holy Mass, Rosary and Marian songs had to be canceled. On request of the disappointed believers, Msgr Acampora declared the following day that the Church has the status of a Pontifical Basilica Cathedral and was erected as a Territorial Prelature in 1926. So it stands under papal law, which is why the responsible Prelate and Pontifical Delegate for the Shrine, Titular Archbishop Tommaso Caputo currently could not ignore the measures of the Apostolic Commissar of the Franciscans of the Immaculate,  Fr Fidenzio Volpi.

"Tell us What We Have Done Wrong?"

Commissioner Volpi had in the course of the destruction of  the Franciscan Order, which the Congregation of Religious calls "normalization", forbid on 27 November, 2013, the ecclesiastically recognized lay association from any activity.  "A radical intervention, which took place without any justification. Tell us what we've done wrong: If it is a sin, an act against the Gospel or a violation of canon law" demanded Claudio Circelli, one of MIM leaders of Naples, for the last ten years, who organized the annual pilgrimage to the Queen of the Rosary.

Unfounded Prohibitions: "So They Don't Apply to Believers"

The ban on the pilgrimage's access at the basilica of Pompeii can be justified formally,  with the activity ban on the MIM.  "A ban in reference to the unjustified ban of the Commissioner, and one washes the other's hands. That's arbitrariness. So it doesn't apply to  the faithful," wrote the newspaper which quoted Il Mattino di Napoli, an  indignant member of the MIM. In fact, a Commissioner Volpi has not justified that the prohibition will result in further bans after themselves without ever explaining in order to punish the lay organization.

Old Mass, Promoting Tradition, Criticism of the Second Vatican Council - For Some Unbearable

The provisional administration of the Franciscans of the Immaculate was arranged by the prefect of the Congregation for Institutes of Consecrated Life and Societies of Apostolic Life, João de Aviz Cardinal Bráz in July 2013.   A step that also took place with the express approval of Pope Francis in a form that the Order took every opportunity to appeal.
The crackdown is connected with that of the hitherto flourishing religious order under Benedict XVI. which changed internally to the  old rite and intellectually took a  very active part in the debate initiated by the German theologian Pope   on the interpretation of the Second Vatican Council. It undertook a defense of Catholic tradition against modernist tendencies in the Church and especially in the training of theologians and priests,  which to some was unbearable in the Church, but under Benedict XVI. they could not take action against the Order. However, due to the pontificate change to Pope Francis, they were active immediately and with the utmost severity against the Order. The arbitrary act against the Order has overshadowed the current pontificate.

The MIM was established in 1990 by the founder of the Franciscans of the Immaculate   in 2013, the deposed   Superior General Father Stefano Maria Manelli in the Marian shrine of Loreto. The MIM align themselves with lay people who try to live in their respective state of the charism of the Order. They vow  to be Marian and missionary and to promote the devotion to Mary and to promote the mission ad gentes, particularly "where the struggle for the salvation of souls and the edification of the Church is particularly fierce."
Text: Giuseppe Nardi
image: Wikicommons

Email ThisBlogThis!Share to TwitterShare to FacebookShare to Pinterest
Labels: Father Fidenzio Volpi OFM Cap., Franciscans of the Immaculate, Mission of the Immaculate Mediatrix, Naples, Our Lady of Pompeii

Rome (kath.net / CBA) A severe bus accident near Naples has claimed at least 39 lives on Sunday night. The coach was on the way back from the Sanctuary of San Pietrelcina according to Italian media.

Giovanni Rotondo in Puglia. There, the group had visited the grave of the popular saint Padre Pio. The authorities are currently trying to identify the victims. There was total of 48 travelers, including many children, who had spent several holidays in Telese in the Benevento region and were on their way back to Naples.

On the highway from Bari to Naples, the driver lost control in front of a traffic jam on the bus. The vehicle broke through the guardrail on a bridge and plunged about 30 meters below. The exact cause is still unclear.

Meanwhile, the Bishop of Pozzuoli, Gennaro Pascarella, arrived on Monday morning at the disaster site. During the day, he wants to visit the injured in hospital, according to the newspaper "Il Mattino" (Monday). The group numbered at least 20 people from the Diocese of Pascarella near Naples.

Link to original kath.net...
Posted by Tancred at 10:50 PM No comments: