Muslims Want to Use Hagia Sophia in Trebizond as a Mosque

Currently being considered is how to hide the Christian frescoes with curtains in the church of Trabzon (13th century) during Islamic religious services because of the ban on images in Islam.

Istanbul (kath.net / CBA / red) The authorities in Trabzon in northeast Turkey, want to share an old Byzantine church for Islamic worship. Currently being given is how they could disguise the Christian frescoes in the Hagia Sophia of Trabzon during Islamic worship because of the ban on images of carpets, Turkish media reported on Monday.

Much like the Hagia Sophia in Istanbul, it was built in the 13th century in Trabzon as a church, and was later converted into a mosque and finally declared a museum. In the case of Istanbul's Hagia Sophia, the authorities have in recent years repeatedly rejected the demand of Islamic groups seeking permission for Islamic services in the sacred building.

In 2006, an Italian priest Father Andrea Santoro, was murdered in another church in Trabzon. He was praying, kneeling on Sunday in his church, as the 16-year-old student, OUzhan Adkin, shot and killed him with two bullets from behind. As the bullets penetrated the priest’s back, Akdin had exclaimed loudly, "Allahu Akbar," "God is great", kath.net reported . Santoro's mother forgave the murderer of her son. The killer appears to be still serving his 18-year prison sentence for "premeditated murder”.

Catholic Caveman has found an article by California Catholic on the most recent foray of the Society of Jesus into art, scandal and sacrilege. The Jesuits in California are doing scary things while turning sacred space into a cultural venue for fascinating multi-cultural goings on, as if the originators of the event had taken a page from Harvey Cox's Secular City.

We thought the above pictured pagan idol reminded us a lot of Crow from Mystery Science 2000. 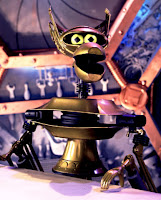 It may be true that museum goers need not have a religious bent to enjoy sacred art, but we wonder whether these California Jesuits at St. Ignatius Church in San Franciso have a properly formed sensus catholicus. No doubt, their desire to shock and break with tradition have all but completely overwhelmed their stated purpose of doing everything for the glory of God.


In a related event at Versailles, France, a similar kind of artistic, cultural terrorism is happening, which may afright and confuse those of us who are accustomed to a more or less conventional experience. It really is a tribute in a way to the revolutionary nature of Museums in the first place, which were really designed according to an Enlightenment idea that the public could be educated by herding them into large public buildings to view art, apart from their privileged and aristocratic associations. 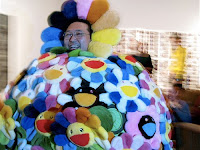 In his New York Times decade-in-art retrospective, Holland Cotter singled out the Jeff Koons exhibition at Versailles as the most significant exhibition of the aughts, and next fall Japanese Pop art star Takashi Murakami (pictured) will have an opportunity to set the tone for the 2010s. (The other contemporary artist to have a show at Versailles, French conceptualist Xavier Veilhan, was featured there in 2009.) Agence France Presse reported yesterday that the Murakami retrospective that was first announced last summer will open on September 12, 2010 and run for three months at the palace outside Paris.

Sadly, [happily for us] because the French have a serious complex about the former seat of their dearly departed monarchy, the art shown therein must be as tame as possible. Or, as AFP puts it:

the palace, a symbol of the system of absolute monarchy, is being careful to avoid displaying works with pornographic or morbid connotations that might offend some visitors.

Posted by Tancred at 1:25 PM No comments: