Berlin's Senator Henkel: "If religious buildings burn in our city, regardless of whether they are churches, synagogues or mosques, then I take that very seriously."

Berlin (kath.net) The fire in the Mevlana Mosque in Berlin two weeks ago was apparently a result arson. A police spokesman explained that a technical defect was ruled out as cause of fire, also negligent arson was considered very unlikely. This was reported in various media. There was no evidence for offenders. A political background could be neither excluded nor confirmed at this time. The state authorities have indicated as kath.net has reported.

The fire broke out on August 12 in an unfinished section of the mosque and caught fire, especially building materials. The mosque facade was heavily blackened. Traces of accelerants were detected.

As of last Saturday Sigmar Gabriel, Minister of Economic Affairs and Vice Chancellor, spoke during his visit to the Mosque of an "assassination" and determined that arson attacks on mosques, synagogues and churches are also "an attack on the center of the society." Even Berlin's Senator of the Interior, Frank Henkel (CDU) said on Tuesday during a visit to the Mevlan Mosque: "If religious buildings burn in our city, regardless of whether they are churches, synagogues or mosques, then I take that very seriously." To mark the event, a protest was staged where undreds of believers prayed on the road. There were also two fires started in mosques in Bielefeld in early August within a week. Link to kath.net... Trans: Tancred vekron99@hotmail.com AMDG
Posted by Tancred at 7:24 PM No comments: 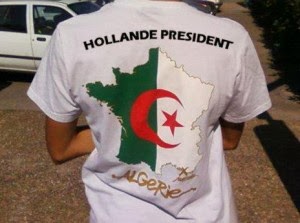 (Paris), France's Socialist President visited the Great Mosque of Paris for a visit to secure the votes of Muslim constituents  for the local elections in March. All presidents in the world are participating in honoring the fallen of the wars, especially now, since the outbreak of the First World War is approaching its centennial.   Only Hollande is instrumentalizing it  to divide the dead according to their religious affiliation in two classes and to honor only the Muslims among them, but not Christians.

VIP visit to the Great Mosque of Paris

On Tuesday, the French President went to the Great Mosque of Paris to unveil a memorial to the 70,000 Muslim soldiers who had fallen from the colonial territories of France for the Grand Nation. The mosque was erected in the Maghreb style  after the First World War as a recognition for the fallen Muslims and bestowed for the first time visibility for Islam   in Paris.
"The Republic it indebted to them," said Hollande and directed attention to  the present: "Islam and its message of openness are perfectly compatible with the values ​​of the Republic in France." Here, the Socialist head of state did not forget to add that "discrimination, inequality and racism" would have to be "fought", because they would form the basis of "anti-Islamic rhetoric and reality".

The daily Le Figaro commented that the principle laudable initiative for the country to honor Fallen, in fact, is mostly indebted to  the approaching municipal and European elections. More than 80 percent of the Muslim electorate in France in 2012 chose Hollande. The mood will have changed by an unfavorable economic development and the "gay marriage". Hollande's Socialist Party strategists fear the loss of what previously seemed to be sure votes.
The expression of honor for the fallen Muslims in France was a long cherished desire of the Muslim organizations in the Grande Mosque. Hollande pushed the date out again and again. The approaching elections have now encouraged him to act.

No ceremony for fallen Christians

In France, a debate has broken out about why Hollande  has divided the fallen into two categories. Once to Muslims, according to their religion, and once to the  French with no religious affiliation. A tribute to the Catholics who have fallen for France and surpass the number of Muslims many times, is not on the program of the presidential office. In a lively debate on various blogs, many French are asking whether only Muslims are allowed to have a religion. Muslims may be, according to Hollande French and  Muslims. Catholics or Protestants, however, may only be French, but not Christians. A blogger asked, "Will Francois Hollande   now also visit the Notre Dame Cathedral in Paris to pay homage to the Catholic soldiers and for the honor of those fallen for France in World War I? We already know the answer. It is because of the aversion of the President against Christianity, of course, 'No?'"
Text: Giuseppe Nardi
Image: Avignon pour Hollande
Trans: Tancred vekron99@hotmail.com
Link to Katholisches...
AMGD
Posted by Tancred at 12:48 PM No comments:

67 Percent of Austrians Say No to Buddhist Temple


On Sunday a vote took place over a contentious Buddhist structure in the community of lower Austria. The vote was a debacle for the supporters of the Buddhist proposal.

St. Pölten (kath.net) The inhabitants of the lower Austrian community Gföhl have voted on a contentious Buddhist structure in the woodland community on Sunday in a poll with 67 of the votes cast decisively against. Because of voter's participation of over 50 percent, the outcome is binding. The structure was previously supported by ÖVP mayor Karl Simlinger. Many Catholics and also the St. Pöltner Bishop Klaus Küng viewed the proposal critically. In a "Kurier" interview a few weeks ago, +Küng criticized that the public were informed that the Stupa would be a world peace monument, while its subsequent information, however, pointed to it being a religious center for Korean monks. Link to kath.net...
Posted by Tancred at 11:28 PM No comments:

As the West Continues to Decay and Its Cities Die

Editor:  Minneapolis has no shortage of Leftists who will employ the police to enforce their views on political correctness.  Normally, this lends itself to domestic disputes and the legal system which is heavily weighted to an agenda hostile to the family, poisonous to the children and ultimately destructive of the State and your security as a citizen. Maybe some day, your country will be returned to you, but it's unlikely to be returned, you must take it back yourself.  Point being, the GOP isn't going to stop this slide.

After being surrounded by a pack of Leftists in a heated debte, the police are called in because some of these solid citizens feel threatened.   Mostly fed up, Conservative blogger, John Hugh Gilmore goes to the bar where he's arrested by Minneapolis' finest after he refuses to leave the bar.  He was later booked downtown for "being uncooperative during arrest" and "disorderly conduct".

Not sure why this is a news story, but the local Leftist art rag loves these kinds of stories where the evil white male is hounded by mindless drones and the People's Militia.

Interestingly enough, he has legitimately praised Minnesota Senator David Hahn for calling Archbishop Nienstedt a Socialist, which he is.

The people who should have been arrrested were the nattering Left-tards surrounding Mr. Gilmore as he tried to point out the evils of multiculturalism and Cultural Marxism.

At best, he'll get a suspended sentence with community service, unless he gets some Marxist judge who hates white males.

Posted by Tancred at 7:05 AM No comments: