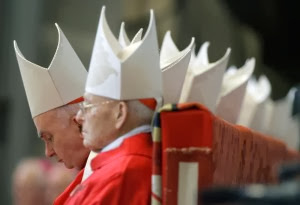 (Vatican) Pope Francis's serious move has begun with the conversion of the Roman Curia, by the appointment of men of his choice. On Saturday, two important personnel reshuffles in the Vatican will be announced. The most important change concerns the dismissal of Cardinal Mauro Piacenza, prefect of the Congregation for the Clergy.

Cardinal Piacenza was appointed only three years ago by Pope Benedict XVI. to this important post. He distinguished himself as a staunch defender of the traditional image of the priest. He saw the solution to the shortage of priests not in other relaxations, but the shortage of priests, among other things as a result of too many accomodations. Thus Cardinal Piacenza encouraged more discipline and tried to deepen the theological, spiritual and practical understanding of the priesthood.

The appointment of Monsignor Piacenza in 2007 as Secretary of the Congregation for the Clergy should have "neutralized" the influence of the then Prefect of the Congregation, the Brazilian Cardinal Claudio Humes. The replacement of Hummes by Piacenza as Prefect of the Congregation in 2010 had to do with the recently failed survey of Saint John Mary Vianney as the Patron of Priests. Pope Benedict XVI. wanted to give the parish priest of Ars to priests for an example. Against this "pre-Conciliar" priest's image great resistence rose to the top of the Church. Cardinal Hummes was one of the opponents.

In mid-January, Pope Benedict XVI. assigned the Congregation for the Clergy the supervision of the seminaries. Cardinal Piacenza had initiated visitations of the seminaries immediately, especially the numerous Roman seminaries. Under his administration, a new Board of Directors for the priests had been adopted. In connection with "50 years of Vatican II", he published texts that aimed to rid the image of priesthood and the priestly formation of distorting interpretations and - as Pope Benedict XVI. desired - back to a stronger bond to a spiritual perspective. Thus, a technical-practical reduction of the priest as an administrator was to be pushed back.

On the appointment of Archbishop Pietro Parolin to the Curia, as the new Secretary of State, he unleashed a discussion about the abolition of priestly celibacy with a new urgency, followed by the dismissal of Cardinal Piacenza, a resolute supporter of the priestly celibacy. Piacenza is to be assigned to the honorable but less influential post of the Cardinal Poenitentiary by Pope Francis and there, to succeeded the Portuguese Cardinal Manuel Monteiro de Castro.

The new Prefect of the Congregation for the Clergy, is a Vatican diplomatic Archbishop, Beniamino Stella. To be precise, the Italian Bishop Stella has been President of the Diplomatic Academy of the Holy See since 2007 and thus responsible for the training of diplomats of the Church.

The second relates to the reshuffle of the Croatian Archbishop Nikola Eterovic. He will be replaced as Secretary of the Synod of Bishops, an office which he held for nine years. He will be replaced by Monsignor Lorenzo Baldisseri, the Secretary of the College of Cardinals. He placed the purple Pileolus on the Pope after his election. Since then, he is considered as a candidate for the dignity of Cardinal. Monsignor Eterović will be the new Apostolic Nuncio to Germany.

The appointment of the new Secretary of State and the reshuffles at the top of the Congregation for the Clergy and the Synod of Bishops took place just before the first meeting of the eight-member Council appointed by the Pope Francis, which is to assist in the reform of the Curia and in the governance of the Church. The announced personnel decisions are the result of considerations of the Cardinal advisors.

The Pope Has Filled Key positions with Intimates - tit for tat for the dismissal the Pope's Friend Cardinal Hummes?

The dismissal of Cardinal Piacenza and Archbishop Eterović seem to be related to the fact that Pope Francis intends to use personal confidantes in two key positions that are important for his further activities. Cardinal Piacenza's age is likely to have played a role in the dismissal but substantive differences of opinion as well. Moreover, as Vatican expert Andrea Tornielli suggests, the transfer of Archbishop Piacenza is a kind of tit for tat for the 2010 dismissal of Cardinal Hummes, who is a friend and elector of Pope Francis.