Will Archbishop Gänswein be Appointed to Cologne? 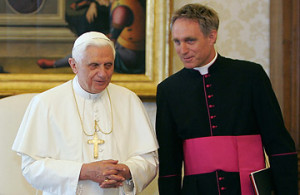 (Vatican)  Pope Francis has made his first appointments.  Following the practice of the Holy See, he confirmed the second secretary of his predecessor, the priest Alfred Xuereb from Malta in office. It is customary that the first secretary resigns with the end of a pontificate and is replaced by a confidant of the new pope. The second secretary of the predecessor is however retained for a transitional period in order to have a smooth transition. In a second moment, as a rule, he will be replaced by the new Pope. Pope Francis has not appointed an first secretary.
Pope Benedict XVI. appointed his first secretary, Monsignor Georg Gänswein in fall 2012, as Prefect of the Apostolic House. As such, he could, if confirmed by the new Pope,  continue performing his duties at the Vatican. The prefect has no influence on the decisions of the Pope, but he coordinates all visits and meetings with outsiders from  leaders to ordinary believers. Msgr Gänswein also remains personal secretary of Pope Benedict XVI., Who currently lives in Castel Gandolfo.
Now, reports the online daily news Cattoliche is that Msgr Gänswein could be appointed as Coadjutor Archbishop of Joachim Cardinal Meisner with right of succession. The secretary of Pope Benedict XVI. could be the next Archbishop of Cologne. It falls on the parallels with Cardinal Stanislaw Dziwisz, the first secretary of Pope John Paul II, who Pope Benedict XVI. was appointed  on 1 June 2005, two months after the death of his predecessor to be Archbishop of Krakow,  the seat of a metropolitan, which had been previously occupied by the late Pope. On 2006 Archbishop Dziwisz was elevated to Cardinal status. Cologne is also an archbishop seat that is traditionally associated with the Cardinal. Cardinal Meisner is at the end of his 80th year.
Pope Francis has also followed the practice, all of the Roman Curia Dikasterienleiter confirmed with the usual formula for donec aliter provideatur until is to make different choices. Therefore nothing can be read in his personal politics for the time being.
Before jumping to higher applies Monsignor Lorenzo Baldisseri, the former nuncio to Brazil and hitherto secretary of the Congregation for Bishops and Secretary of the College of Cardinals, which is why he played a special role in the conclave. As Pope, Francis, just elected, received the white Pileolus of the Pope, he put on his purple Cardinal’s pileolus  on Msgr. Baldisseri. This spontaneous gesture is seen as a sign that the Curia, that the Archbishop will be raised by the next Conclave to the Cardinal rank. The elevation of Cardinal Conclave Secretary certainly has a tradition in the church. Benedict XVI. created the then secretary Curia Archbishop Francesco Monterisi, not the first consistory, but later.
An appeal to the Curia could affect Monsignor Nicola Girasoli, the nuncio in the West Indies. He has been friends with the new pope for some time and until 2005, worked for six years as a Counsellor at the Nunciature in Buenos Aires.
Text: Giuseppe Nardi
Image: Messa in Latino
Posted by Tancred at 9:22 AM No comments: