Regensburg Dompatzen: The Report and the "Coincidental" Names of Ratzinger and Müller 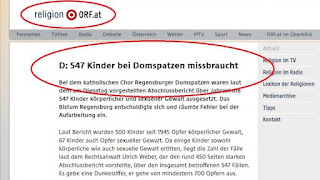 (Regensburg) "What a coincidence," wrote Vaticanist Marco Tossatti regarding the investigation of abuses in the Regensburg Domspatzen, after his acquaintance with the final report. He did not believe in "coincidences," said Tosatti, if they were to happen in "a country so precise and above every suspicion as Germany." This thought came to the attention of the Vatican, when he had to read yesterday that the "final" report on abuse was published at the Regensburg Cathedral.

The ORF and numerous other media yesterday headlined, "547 Children at Regensburger Domspatzen Abused." The verb "abused" makes you cringe and think of sexual abuse of minors. A rogue might think, with the ORF one would not have exactly intended that. A glance at the article shows that almost 90 per cent of the cases were physical chastisement, which was one of the most common methods of education in the period under investigation since the end of the war. The example demonstrates the enjoyment with which the "quality media" are currently, vehemently presenting themselves as the defenders of journalism against the spread of "fake news," in the event of resentment, in this case against the Church. The same year, the same ORF had used the verb "abuse" in connection with the Regensburger Domspatzen, as Der Spiegel did yesterday. In this case the "crux" is, as is often the case, in the large press agencies. They specify line and words that are taken over by the other media. Suspiciously, Tosatti, who does not mention the ORF report, is interested in the fact that the latter, in order to remain an example, comes from the "religion" section. At the latest, we can see that the issue is also about Church policy.

The "final" report presented on Monday speaks of 547 cases in the period of half a century, of which "thankfully, or thank God," only "concern 67 sexual abuse cases," says Tosatti. The rest are from educational methods, which at the time had been disapproved of by at best only a few parents.

More serious is sexual abuse. "The German Church did well to work it out with an investigation by a person responsible to someone external to the institution." 48 Victims were found. The two chief perpetrators have been dead for about 30 years, which is why prosecution is impossible. It would no longer be possible due to statute of limitations anyway. The victims will receive compensation of 20,000 euros each.

"At this point, coincidences begin," says Tosatti. As "fate" would have it, Georg Ratzinger, the older brother of Joseph Ratzinger, had been the musical director of the Regensburg Dompatzen for 30 years appeared in the final report. Seven years ago he said in an interview that he had also handed out a few Ohrfeigen [boxing the ears] for his first few years in his role at that time. Those who were young at that time know from their own experience or at least the observation that head smacking [Kopfüsse] and Ohrfeigen were not a rarity in the fifties and early sixties. "If I had known something about the abuse, I would have done something," Georg Ratzinger said at the time. And also "I apologize to the victims." He also did it because of the pain that the good reputation of "his" Dompatzen was defiled by the deeds of others.

At the press conference on the presentation of the final report, however, the lawyer, Weber weighed in heavily. He gave Georg Ratzinger the responsibility of "closing his eyes" and not doing anything. Is Georg Ratzinger, who is not accused in the report of being himself involved in ill-treatment or even abuse, only a substitute accused because the real perpetrators are long dead? Or is he given the responsibility because he is called Ratzinger, and because his more famous brother was the head of the Catholic Church, and is still somehow so for a few Catholics? Was the side swipe only for media attention, which was promptly granted, or once again broke into that deep German anti-Ratzinger reflex?

Tosatti does not believe in any "coincidence" because of its timed occurrence with Benedict XVI's message for the funeral of Cardinal Joachim Meisner. This message was read as a criticism of the state of the Church and of the shepherds who did not fight against the dictatorship of the Zeitgeist under which the German church groans.

"Then there is Cardinal Gerhard Müller," said Tosatti, who is also mentioned in the final report. Before his appointment as Prefect of the Congregation for Doctrine and the Faith, Müller was the Bishop of Regensburg. The report criticizes how he had handled the "case" of the Regensburg Dompatzen. Above all, he is accused of a lack of dialogue with the alleged victims. To this Tosatti wrote:

"Poor Müller! It was not enough to step through the pope, and after the first stomach pain (see the interview with the Passau Neue Presse ), he had to pretend that nothing had happened, and that the Pope wanted him nothing but good. Now this sympathetic trifle came through his native Germany, where, as is well known, he is very popular among his countrymen."


The loser is the one who's mocked, says a German proverb. In the case of Cardinal Müller, it is evident that there is no lack of countrymen within and out of the Church, who are eager to show their disapproval. And whenever someone is down, it is particularly easy. In some cases, some seem to be interested in the fact that the Cardinal will never get up again. Yet he will not give them such satisfaction, which he will do even if he is weakened in his power.

At the same time as the presentation of the final report, the appointment of the new secretary of the Congregation of the Doctrine of the Faith was announced in Rome . To this Tosatti wrote:

"The one who was appointed was not, as expected, the Assistant Secretary, Archbishop Agostino DiNoia, but the under-secretary, Monsignor Giacomo Morandi, the man who was placed in the Ratzinger and Muller Congregation a year and a half ago. A pretty quick career. He is really born under a lucky star, like that of Beniamino, the Prefect of the Clerical Congregation and the great director of the pope's court. All just coincidences." 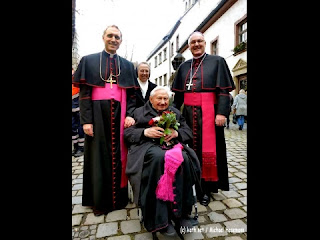 Prefect of the Papal Household, "I do believe that the investigation will clear up allegations of wasting money, non-communication and skipping of controlling bodies in favor of the bishop" - Cardinal Lehmann: "media campaign."

Regensburg (kath.net / KNA) The Prefect of the Papal Household, Archbishop George Gänswein (photo), expects the exoneration of Limburg's Bishop Franz-Peter Tebartz van Elst by the Episcopal Conference Commission. "I do believe that the investigation will clear up allegations of a waste of money, non-communication and skipping of controlling bodies in favor of the bishop," Gänswein said in an interview with the online edition of the "Mittelbayerischen Zeitung" in Regensburg.

The result must then be submitted to the Congregation for Bishops in Rome, continued the private secretary of Benedict XVI. "Only then, and after careful consideration, the Holy Father will himself make the decision."

Gänswein took part on Sunday in the celebration of the 90th birthday of Georg Ratzinger in Regensburg, representing the emeritus pope. "For him, it was comforting that I have come to his side. But it is also naturally a bit difficult for him." Benedict XVI. will no longer journey to Regensburg, not even secretly, says Gänswein. "After so many years of experience, I think that's impossible."

Georg Ratzinger turned 90 years old on 15 January. Today he celebrated Mass  along with his brother in Rome, who is four years younger. On Sunday in Regensburg, a Pontifical Mass in his honor was held in the cathedral. There, the Cathedral Choir led by the former Director of Music for one of his own compositions on the Mass "L'Anno Santo". On Saturday they had surprised the former Director of Music with a serenade outside his home. Georg Ratzinger headed the world-famous choir from 1964 to 1994.

Cardinal Lehmann took a position in the CBA interview about Tebartz van Elst and replied that after a visit with Pope Francis, the matter should be made clear as soon as possible, so that it should not endanger the Church's spirit of optimism. Because the process fosters mistrust and a hostile sentiment against the Church.

"I told him that I think the Limburg Bishop is a very intelligent, well educated, communicative and polite man, of whom I have never experienced anything of wasteful swank," said Lehmann as to his view of the Pope's audience, however, a certain policy of secrecy is said to have burdened the process, and. «a media campaign has stoked it." 90th birthday of Monsignor Georg Ratzinger - With Curia Archbishop Georg Gänswein and Bishop Rudolf Voderholzer - Celebration in Regensburg Pontifical Mass in Regensburg Cathedral in honor of Domkapellmeister em. 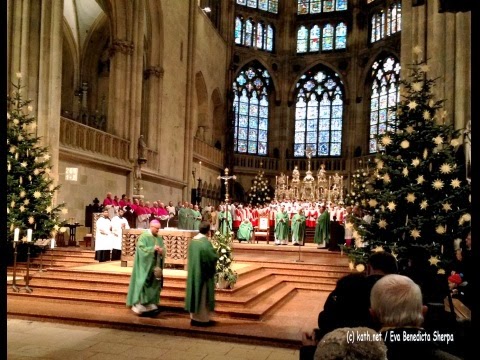