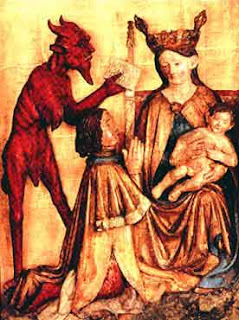 (Mailand) "The Devil? He appears rarely in Milan, but sometimes still", writes the the Vaticanist Paolo Rodari about the city of St. Ambrosius and Charles Borromeo.  The number of people, who day for day use the Archdiocesan clergy offices, because they think, that they have been possessed by the devil or concerned about a person close to them, are steadily rising.

The requests are so numerous, that the Archbishop Angelo Cardinal Scola is adding the College of Exorcists in the Archdiocese and doubling their number through new appointments.  In the mean time the largest Diocese in the world doesn't have 6 exorcists, but 12 exorcists.

"As the inquiries show, the desire has doubled also,"  says Msgr. Angelo Mascheroni, Auxiliary Bishop of Milan and the one responsible as Director of College of Exorcists since 1995.  "There are so many questions, that we had to establish a telephone bank as the first point of contact."  This first telephone contact number gives information, offers the initial information and views the incoming questions according to various criteria, above all according to the principle of location, to spare the sufferer from a long journey.

How does the Devil show himself?, asks Rodari.  "I always ask fundamentally, if the affected person had visited sorcerers to whom they may have paid money to before they turned to us.  I also ask if they have been to a specialist, who can sometimes diagnose a psychic problem.  Finally,  it is also concerned with protect the relatives, where sometimes the parents, siblings or children can persist, that the devil is in play.'  The highest mission of the Exorcist is to be attentive and give consolation, where they are most concerned with experiences of broken people, who curse their neighbors.  It is appropriate to treat all with objectivity and to redirect to give these people notably the right view on reality, above all also the security, that the Lord is always greater and more powerful than the Devil.  The truly diabolical appearances are very rare in my experience."

Who turns to an exorcist? "The young and the old, men and women, people of various levels of education from those with the most elementary educations to academics.  Most call relatives near them, for the children and the youth, the parents.  They report that their son or their daughter rebels, and will not go to school any longer, takes drugs.  In the great majority of the cases there is no possession.  It involves natural generational conflicts much more in the development of youth.  It doesn't have to do with the actual calls for help, where the youth and the parents learn correct ways of interacting, in order to master a period of transition common to al.  It is therefore important to ask the seven questions, in order then to help notably, by recognizing real demonic appearances.  Msgr Lorenzo Longoni, a famous Exorcist says, that in his life he's only conducted one real Exorcism."