Edit: this is from the SSPX District page, which is a kind of Christmas present from the German government: 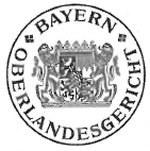 The era of slander against the Society of St. Pius X is coming slowly to an end.

Often there are and have been journalists, who in the newspapers or other media disseminate downright  tall tales about the Society.

The most recent case was on the 25th of October in the Mittelbayerischen Zeitung.  There an author by the name of Fritz Winter presumed to make hair raising assertions about the Society.

The Society went with these articles to the Court of Appeals in Nurenburg and received justice.

I.  As far as the appeal  by the applicant the conclusion of the Regensburg court of the 23rd of November has been amended.

II.  The adverse party will be condemned in the manner of an injunction, immediately in the first part of the "Mittelbayrischen Zeitung" with the same font as the editorial:

"The evil brothers" is printed on October 25th, 2012 without insertions and deletions reprints the following reply:

In the commentary "the Evil Brothers"  by Fritz Winter on the 25th of October, 2012, there were several untrue assertions of fact:

1. "The Society of St. Pius X is ... in its heart, an organization hostile to the Constitution."

It's true that the Government upon the proposal of the Representative Volker Beck among other things, had directed (Bundestag Printed Paper 17/3334): "According to the Constitution of the Government there is in relation to the Society of St. Piux X  no ... evidence for a constitutionally hostile activity."

2.  "They [The Society]  Promotes a "Catholic Theocracy".

It's true, that the Society does not promote a "Catholic Theocracy".

3. "They [The Society] oppress the rights of women."

It's true, that the Society neither oppresses women, nor their rights.


4.  "A serious distancing of all members [The Society] from Williamson and from anti-Semitic inclinations is not evident."

It's true, that the entire Society, represented by a majority through their General Superior and German District Superior as through the Rectors of the Priestly Seminary in Zaitzkofen, repeatedly and clearly has distanced itself from Bishop Williamson, whereby his  henceforth consequent expulsion goes beyond a mere distancing.  Similarly the Society has distanced itself from every form of anti-Semitism.

Judge to the Court of Appeals

This court decision of the Higher Regional Court, Nuremberg is a major victory for the Catholic tradition, because he slanders against the SSPX by anti-clerical circles put a stop.>