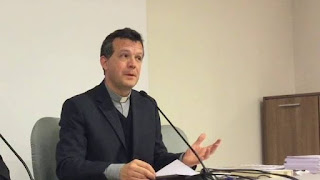 (Rome) Pope Francis appointed a new Undersecretary of the Congregation for the Doctrine of the Faith. After the upheavals at the head of the Congregation at the beginning of the summer, which reinforced the renovation the end of the summer.
As announced yesterday in the Daily Bulletin of the Vatican Press Office, Francis appointed the Italian priest Matteo Visioli as secretary of the Congregation for the Doctrine for the Faith.
Visioli, born in Parma on July 20, 1966, was ordained a priest for his homeland. After studying theology at the Pontifical Gregorian University, he earned a degree in theology in 1994 and canon law in 1996. In 1999, he completed his specialization in church law with a doctorate.
From 1999 to 2008, he was a diocesan Vicar for Relations Between Church and World, and from 2001 to 2008 he was also a member of the Committee for the Church Property of the Italian Bishops' Conference. As a priest he worked in Collecchio and San Martino Sinzano.
Most recently, he was president of the non-profit organization Caritas Children, Episcopal Vicar for Pastoral Care, director and lecturer of the Interdiocesan Higher Institute of Religious Studies of San Hilario de Poitiers and lecturer for Church Law at the Gregoriana and at the Generalities Marcianum of Venice. He is the author of numerous scientific publications in the field of church law.
Don Visioli assumes the position of Monsignor Giacomo Morandi, who Pope Francis had appointed in October 2015  to be the Undersecretary of the Congregation for the Faith. The dismissal of Cardinal Gerhard Müller as Prefect of the Congregation of Doctrine on this last 30th of June resulted in a personal shuffle with several promotions. The then secretary of the Congregation, Jesuit Luis Ladaria Ferrer, was appointed Prefect by Francis, and Msgr. Morandi has been appointed Secretary. At the same time Francis raised him to be the titular archbishop of Caere.
There has been no change for the traditional Dominican, Father of the Archbishop, Father Augustine Di Noia. Pope Benedict XVI had appointed him deputy of the Pontifical Commission, Ecclesia Dei , in June 2012, after the failed talks with the Priestly Fraternity of St. Pius X. From there, Pope Francis withdrew him a few months after his election, and appointed him to be the associate secretary of the Congregation for the Doctrine of the Faith. From 2002 - 2009 Father Di Noia had already been the undersecretary of this congregation.
Text: Giuseppe Nardi
Photo: Youtube (Screenshot)
Trans: Tancred vekron99@hotmail.com
AMDG
Posted by Tancred at 7:57 PM 21 comments: