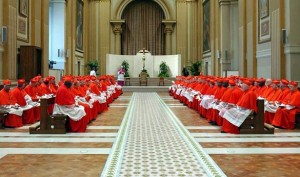 (Vatican) Pope Francis  has today accepted the resignation put forward on grounds of age resignation of Cardinal Julio Terrazas Sandoval CSsR as Archbishop of Santa Cruz de la Sierra. The Cardinal of the Redemptorist order is already the third cardinal and Conclave participant.  The Pope has accepted his resignation in the two months of his deadline. The new Pope has shown little willingness to extend the terms of office beyond the intended minimum set in canon law.
Only a week ago, on 18 May the Pope accepted the resignation of Cardinal José da Cruz Policarpo as Patriarch of Lisbon.  On April 5th Pope Francis had accepted the request of Cardinal Audrys Backis as the Archbishop of Vilnius. All three Cardinals are in the 77th or 78th year of their lives. Pope Benedict XVI. had granted them an extension of the term of office. At least the resignation of Backis and Policarpo was "no loss" for the church, as the Church Historian Francisco de la Cigoña remarked.
Church law provides that diocesan bishops and members of the Roman Curia must offer their resignations at the age of 75 Years of age to the Pope. It  doesn't operate as an age limit. The scheme will offer the opportunity to the Pope to decide on officials theoretically appointed for life, without notice. If the Pope does not act on the request, the request must be renewed in the interval of two years.
While Pope Benedict XVI. tended to extend the terms of office, especially when they were archbishops and even more if they were cardinals, Pope Francis is seeming to follow a different line. The three Cardinals  will continue until the age of 80 years to be of an age eligible to vote in a conclave. When retired, they are no longer in active employment as Cardinals, however they are so de facto excluded from among the papabili.
On the 25th of December, Cardinal Joachim Meisner, archbishop of Cologne is 80, Cardinal Secretary of State Tarcisio Bertone on the 2nd of December had his  79th,  the Vietnamese Cardinal Pham Minh Man was born in 1934. Since his birth is not known, the 31st of December applies as the date.
In total there are 18 cardinals who could have their resignations accepted by the Pope at any time, including with Cardinal Meisner and Cardinal Lehmann, who are also Germans. So the Pope has the opportunity to fill aout 20 new leading ecclesiastical provinces and make important decisions in the Roman Curia.
By the end of the year there will be 12 places  free to reach the number of  voters for Pope at 120  limited by Pope Paul VI.. It is therefore believed that Pope Francis probably could convene his first extraordinary consistory in autumn, to create new cardinals.
Text: Giuseppe Nardi
Picture: Blog Papa Ratzinger
Translation: Tancred
Link to katholisches.....

Posted by Tancred at 3:22 PM No comments: