Philosopher Robert Spaemann pins great hopes on the new Pope, criticized "modernists" in the church and welcomed people leaving the church, who reject the Catholic doctrine

Berlin (kath.net) The well-known philosopher Robert Spaemann has warned in a recent interview with the "Junge Freiheit” of  an impending  church revolt and a split from Rome that is reminiscent of the historic anti-Roman affect which recalls the dualism of the Emperor and the Pope. "The secularization trend is worldwide, but where there is such a thing as the Central Committee of German Catholics, which is financed from church taxes? Fact is that in a Curia Bishop or private secretary of Pope hardly has the chance that a German cathedral would accept him as diocesan bishop" says Spaemann.  For him  it is also clear that the de-Catholicisation is a result of de-Christianization and that Protestantism will erode faster.

Surprising the process was not. The philosopher remembered this referring to the letter to Timothy, in which the "great apostasy" was the speech and of times when the people will not endure sound doctrine. "The people want a 'Wellness' religion." But, as CS Lewis says, if the question is, which religion is the most pleasant, he would not recommend Christianity. And he adds, that can be accomplished 'also a by bottle of port,’" says Spaemann.

Secession from Rome is still nothing better than an evaporation of Christianity. He himself, however, considers that "gradual erosion” is more likely, as a schism will probably be prevented by the church tax system. “The “modernists" in the Church who have already left are specifically continuing in the way of the Evangelical Church (Protestant Church in Germany). Because there you can find almost all of their demands fulfilled already. But they do not want to leave," said Spaemann. The reason is that we would not even now like to leave the fleshpots of Egypt. "More precisely, these groups represent in the Catholic Church which is something that they could no longer represent if they were Protestant and they benefit from the church tax, since they are funded by the official Church. '." He personally welcome the release of people who reject the Catholic doctrine and can have nothing to do with the Catholic Church.

The Catholic philosopher criticized then the usual “Liberal reform agenda”.  In this, the issue of the Christian faith, doesn’t even enter into it. Instead, it is about sexuality, "gender", ecumenism, democratization etc. "It may not be a trivial question, but it certainly is not the last question." Who talks about these, must be bored by most of the demands for reform. So it is with the questions of the relationship with God, to intellect, salvation, hope, salvation, eternal life, eternal death." A Catholic liberalism doesn’t attract the intellect, though he find pertinent applause. "Martin Mosebach writes that in his youth, in the society of his parents, a reform of the Liturgy of the Mass - the abolition of the Latin, etc. -. seemed absolutely imperative.  But then there was no longer a reason to go to Mass," said the philosopher. Reform of the Church had to be spiritual in nature. It must lead you to be more needful of it.

Robert Spaemann declared at the end of the interview that he also had high hopes for the new Pope Francis.  Spaemann writes to the "Junge Freiheit” in his own words: "On the one hand is a pope in the footsteps of St. Francis of Assisi, who cares so particularly about nature and the poor and at the same time defends the Catholic tradition and orthodoxy, it is not as easy to disparage as "reactionary", as was the case with the thinker Benedict XVI.  unfortunately.

Incidentally, the "Cardinal of the poor", as he was called in Buenos Aires, was no friend at all the so-called Liberation Theology. And: It is perhaps little known that St. Francis in his Testament, the priests of the Church  are ranged higher than the angels, which requires unconditional respect for them, as well as the greatest treasure being the place where the Eucharist is kept. From the shift to the poor a revival of spiritual perspective can be made, the perspective that is directed towards eternal life. “

The Old Liberals Are Frozen 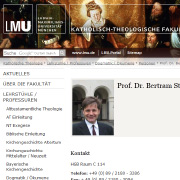 The Society of St. Pius X belongs to those few Catholic societies in Germany, who could hope for a future.

(kreuz.net)  The Second Vatican Council has been a "great moment".

This was explained by the Munich Dogmatic Theologian, Fr. Bertram Stubenrauch (51) on the 13th of November in "Mittelbyerischen Zeitung".

He was quick to modify his statement:  "If one discusses the faith and considers it, as it should continue in the Church, it is always a special moment."

Does he think this only of the Left?

As to the question about the most important results of the Council the secular history remains unanimous.

The Council recognized that "God is for everyone who is."

Christians would "not have arrange the right, who is nearer to God or further away from him" -- he said.

With that he has implicitly declared that even Bishop Richard Williamson is in the heart of the Church.

The Old Liberals are Frozen

The Society of St. Pius X as far as that goes "is frozen on a certain point of the stream of history"  -- distorted Fr. Stubenrauch.

In reality the Society of Pius X is one of the few Catholic societies in Germany which could hope to have a future.

Who is "narrow minded"?

He eagerly reads the Conciliar texts:  "They make the security of the faith detectable" -- said the emotional Fr. Stubenrauch and quickly continued, that this security is "not narrow minded."

Doesn't he want to distance himself from the narrow minded and incorrigible Old Liberalism with this statement?

The statement that the Council has "created obstacles", Fr. Stubenrauch responded with: "It's always been that way."

He didn't bring the evidence from Church history for this.

What is going to come from the Conciliar Church, "no man knows" -- he said with a damning judgment.

As to the question if   -- as the question was pitched to him by his interview partner --
if the "progress" went too slowly, Fr. Stubenrauch answered cooly: "no".

Because: "Who will answer for the reforms, if they lead again to conflicts and new schisms?"

And: "Anything which doesn't grow is an artificial religion."

A third Vatican Council is not needed according to Fr. Stubenrauch: "The desire is expected in our hectic time."

He is for that which the Second Vatican Council has implemented, "now it will be implemented in peace and  the difficult questions won't be blocked."

Actually, that latter is exactly the situation in the Old Liberal concrete Church.