Descendant of Saxon Kings Has Died

A promoter of the Old Mass


He saw to it that through his example and engagement that Catholic tradition should take root again in his homeland after Communism and Council. 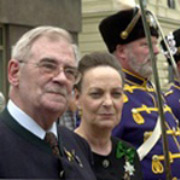 He was the head of the former royal house of Saxony, Wettin's Albertian line and called himself the Markgraf of Meissen.

His grandfather was Friederich August III (+1932) and was the last Saxon King.

Armed with the Sacraments


The Prince died on Monday at the age of 86 in his house in the 11,000 population community of La Tour de Peitz on the shores of the Genfersee in west Switerland.

He was well provided with the Last Rites of the Church to step before the judgement seat of God.


The Markgraf was the recipient of numerous distinctions.

He bore the grand cross of the Sovereign Order of Malta as well as a Knight of the Order of the Golden Fleece.

The deceased is survived by his bride, Anastasia-Louise Markgraf of Meissen.  Her marriage was childless.


The new head of the House of Wettin will be the adopted son Alexander Prince of Saxony -- Duke of Saxony.

He lives in Germany and Mexico.

Prince Alexander is the son of the deceased's sister.

The viewing of the Markgraf will be in the new Saxon Royal Chapel in Imst-Brennbichl in the Tyrolean highlands with close family members.

The crypt is on the pilgrimage route to Santiago de Compostela, where the grave of the Apostle James is located.

The Prince remained true to his homeland in Saxony.

He visited the residential city of the House of Wetting in Dresden, so often as his health allowed.

There he regularly arranged a Holy Mass in the Tridentine Liturgy for his relatives.

He visited the grave sites of his predecessors, who were interned in the local church in the crypt of the Wettin family.

A Promoter of the Old Mass

Maria Emanuel was a supporter of the traditional Liturgy and tradition of the Church, according to reports from the website 'pius.info'.

Through his example and engagement, he saw to it that the Catholic Tradition in his homeland would set down roots again.

Through his influence the Immemorial Rite of the Mass was celebrated again in various locales.