Greg McAtee first joined the Knights of Columbus 16 years ago, when he was 55.
He was joining a formidable club, the largest Catholic fraternal organization in the world with alumni like Babe Ruth and John F. Kennedy, and it continues to have powerful political allies in 2019. He was also, though he didn't realize it at the time, becoming a pawn in an alleged scheme to inflate membership numbers for a multibillion-dollar life insurance company.
But to him, the Knights were mostly just a group of nice men from his parish in Mobile, Alabama, who wore matching shirts with shield insignias. They raised money for charity, had Christmas parties for good causes, and fried fish for its friends and family in the local community center.
Today, however, McAtee is a witness for the plaintiffs in a massive new lawsuitthat could shake one of America’s most powerful socially conservative groups to its core. The case is accusing the Knights of Columbus of “racketeering, fraud, deception, theft, and broken promises,” a complaint in the US District Court for Colorado, which will begin hearing the case Monday, reads.
Edit: the Schadenfreude is strong!
.Link...
AMDG
Posted by Tancred at 2:47 PM 22 comments:

Knights of Columbus Dismisses “Grand Knight” for Being “Inappropriate”

Edit: read closely. He wasn’t fired because he led a notorious life, but because he was open about it. Had he kept his degeneracy private, he would have been OK! Even so, they’re going to have a hard time making this stuck. We imagine that someone soon will cave. Perhaps the Porno-Kardinal of Vienna will intervene to mediate? If they’re not going to dump Masonic members for belonging to thenLodge, there’s probabaly not much hope for them here, either.

MANCHESTER, N.H. (ChurchMilitant.com) - A New Hampshire Knights of Columbus chapter is getting slammed for upholding Church teaching that homosexual acts can never be approved.
Andrew Keyes, former Grand Knight of Saint Anselm College Council #4875, recently resigned after Andrew Cilento, a fellow Knight, complained that Keyes brought his boyfriend to a Knights formal on March 16. The complaint was leveled against the Supreme Council of the Knights of Columbus in New Haven, Connecticut, and Fr. Benedict Guevin, OSB, the chapter's chaplain.
In a statement to the Hilltopper, an unofficial school newspaper, Cilento defended his complaint saying, "It was inappropriate for Mr. Keyes to hold a leadership position for a Catholic organization while being in a relationship that is contrary to the teachings of Holy Mother Church."

Can Masons be Members of Knights of Columbus?


Edit: we'd earlier identified a possible cooperative action between the Knights of Columbus and the Masons, where a pancake breakfast benefit sponsored by the Masonic Lodge was being permitted at a Knights of Columbus Hall, giving the very clear idea that they were cooperating and approving of each others aims and goals.

In an October version of a Knights of Columbus circular flier in 2008, there was this admonition on the bottom, really more of a CYA after the fact.  How many Knights have actually read it at the bottom of the page?

James Terwedo is the Knights Counsel (who is listed as the contact person in the 2008 explanation) and is the same one who made the incredible argument that since the Knights don't technically own their brick and mortar that they'd have to rent them to homosexual organizations as long as they don't overtly oppose Church teaching.

In any event, it's interesting that Mr. Terwedo was aware of the prohibition against Knights belonging to the Masonic Lodge in the context of the planned  benefit.  What follows is the excerpt from the Knight's flier:

Can Masons be members of the Knights of Columbus?  The answer is no!
Why not?  Because, the constitution of the Masons is in conflict  with the
precepts of the Catholic Church.  In order to be a member of the Knights of
Columbus, a person must be a practical Catholic in union with the Holy See.
The Holy See is the Vatican.  A person can be a practicing Catholic, ie goes to
church, takes communion, etc., but not necessarily be a practical Catholic.  A
person who is a Mason can not be a practical Catholic because he belongs to an
organization that has a written constitution contrary to the teachings of the
Catholic Church. A Catholic who is a Mason can resign his membership in the
Masons and thereby become eligible to become a KC. Most of us know some
good Christians who are our neighbors, fishing buddies, relatives, etc. and they
are Masons.  But even Catholic Masons, can not join the Knights of Columbus.
If you have any questions, please contact State Advocate, Jim Terwedo at 952-
492-2800.

Email ThisBlogThis!Share to TwitterShare to FacebookShare to Pinterest
Labels: Knights of Columbus, Masons

Update: [GMT 7:33pm] It's confirmed.  There will be no Masonic pancakes at the "Marian Lodge".  It has been cancelled for unknown reasons.

Edit: We reported on yet another incident of cooperation between Masons and the Knights of Columbus on July 23rd.  The Knights leadership in the state of Minnesota attempted to downplay this by appealing to some shell game action.   They claimed that since their halls aren't owned directly by the Knights, that they can be rented to anyone.  The explanation given by the State Advocate James Terwedo  was also scandalous, unconvincing and pathetic.

"We would allow gay and lesbian use of the KC Hall as long as they were not publicly opposing church teaching."


It's unconfirmed presently, but it looks like the Masonic Breakfast which was scheduled to take place this Sunday, August 12, was to be held at the Marian hall, Knights of Columbus, 1114 American Boulevard West, Bloomington, is being cancelled.

There was quite a lot of pressure brought to bear and we'd like to thank those who prayed and acted on this.

No doubt, this isn't the last time something like this will happen, since the people who allow these things to happen in Knights of Columbus are still drawing salaries.

Email ThisBlogThis!Share to TwitterShare to FacebookShare to Pinterest
Labels: Collaborating with evil, Freemasons, Knights of Columbus

Knights of Columbus and Masons Have Pancake Breakfast! 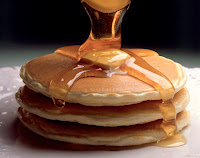 Update: State Advocate for the Minnesota Knights of Columbus made the following disingenuous statement: "We would allow gay and lesbian use of the KC Hall as long as they were not publicly opposing church teaching."

Perhaps the folks at CPCSM would be interested in renting a hall in the future, or perhaps the Ku Klux Klan?

Edit:  Isn't it great when two fraternal organizations whose mutual association would be frowned upon by the Catholic Church, look past all that to break bread in an official capacity? 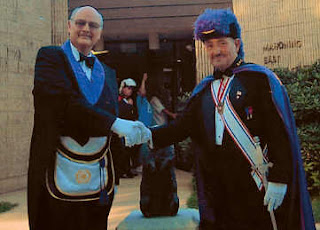 FYI, from then Cardinal Joseph Ratzinger via here:


It has been asked whether there has been any change in the Church’s decision in regard to Masonic associations since the new Code of Canon Law does not mention them expressly, unlike the previous code.

This sacred congregation is in a position to reply that this circumstance is due to an editorial criterion which was followed also in the case of other associations likewise unmentioned inasmuch as they are contained in wider categories.

Therefore, the Church’s negative judgment in regard to Masonic associations remains unchanged since their principles have always been considered irreconcilable with the doctrine of the Church and, therefore, membership in them remains forbidden. The faithful, who enroll in Masonic associations are in a state of grave sin and may not receive Holy Communion.

It is not within the competence of local ecclesiastical authorities to give a judgment on the nature of Masonic associations which would imply a derogation from what has been decided above, and this in line with the declaration of this sacred congregation issued Feb. 17,1981. 4 .

In an audience granted to the undersigned cardinal prefect, the Supreme Pontiff John Paul II approved and ordered the publication of this declaration which had been decided in an ordinary meeting of this sacred congregation.

The medical bills are high and the lodge is trying to raise some money and then go to the Grand Lodge for some matching funds in an effort to help him out.

Supreme Knight renews consecration to Our Lady of Guadalupe: And Insults Her

Despite these pious assertions, the Knights of Columbus is still a gutless and facile organization devoted not to the truths of the Catholic Faith, but to values completely alien and hostile to it.

Unfortunately, many Catholics will continue paying, praying and obeying.

On Faithful Citizenship, the Supreme Knight noted that “the vast majority of Knights of Columbus activity is directed toward matters of faith, charity and family life. We are not a political organization, and partisan politics is expressly prohibited by the Constitution and laws of the Order.”

“Our members include people of many political persuasions, and our goal is unity in faith and fraternity, whatever our political differences might be,” Anderson said. However, he explained that “we do, however, take positions on a limited number of key issues that we believe are fundamental to faithful Catholic citizens and involve matters that must transcend partisan politics.”
“Our guides in this area are two of the great documents of the Second Vatican Council: 'Gaudium et Spes,' which addressed the role of the Church in the modern world, and 'Dignitatis Humanae,' its teaching on religious freedom and the fundamental dignity of the human person.” [This is shorthand for not getting rid of members of the Knights who are Freemasons, Pro-Abortion or other brands of Unfaithful Catholic. On the contrary, the Knights will throw out those who are Pro-Life.]