Vatican: "All Bishops Should Prepare the Faithful for the Post-Synodal Letter

(Rome) The publication of the post-synodal letter is imminent. All the bishops of the world  will be prompted via e-mail by the Pontifical Council for the Family  to prepare the faithful and the public for the adoption of post-synodal letter of Pope Francis on Marriage and Family.

HERE YOU CAN ADVERTISE »
As reported by La Croix , the daily newspaper of the French Bishops' Conference  the electronic notification comes from Curial Archbishop Vincenzo Paglia, President of the Pontifical Council for the Family . He urged all bishops to convene a press conference - if possible everywhere at the same time, namely, simultaneously, with the press conference in Rome - to present the post-synodal letter of Pope Francis about the family.
The letter is the result of double Synod on marriage and family, which took place in 2014 and, 2015. It is to replace the Apostolic Exhortation Familiaris Consortio  (1981) by Pope John Paul II. During the double synod at the Vatican, there had been violent conflicts between the members of the synod who defended the sacrament of marriage and the Christian moral teachings, and a beneficiary of Pope Francis' minority, Cardinal Walter Kasper, who wants to enforce a change in the Church's teaching by way of a change in practice.
The "Kasperians" have called de facto, for a recognition of divorce and homosexuality. Curial Archbishop Vincenzo Paglia, a member of the Community of Sant'Egidio , stood on the side of the Kasperians.
Paglia's invitation to the bishops stated that the idea of ​​the post-synodal letter  recommended that the press conference should have "an expert on family ministry" done primarily by "a theologian or a pair" who are capable of speaking "to a large audience."
According to leaks, the post-synodal includes a good 200 pages. The probability that it will be read by a wide audience is therefore extremely low. What   overall impression it will give, therefore, is highly dependent on the presentation, the keywords which will be stressed and their playback from the media.
Text: Giuseppe Nardi
Image: La Croix (Screenshot)
Trans: Tancred vekron99@hotmail.com
Link to Katholisches...
AMDG
Posted by Tancred at 12:48 AM 44 comments:

Official and Secret: Double Bishops' Synod -- Where Was Cardinal Schönborn?

(Rome) While the secret meeting of the new progressivist Rhenish Alliance took place on Whit Monday in Rome at the Pontifical Gregorian University, Pope Francis gathered the Council of the General Secretariat of the Synod of Bishops at the Vatican. On the 25th and on the morning of May 26, the Pope personally directed the work.
Member of the Council is the Archbishop of Vienna, Cardinal Christoph Schönborn. The president of the Austrian Bishops' Conference was the great absentee in these secret meetings, which  took place a remove of less than three kilometers from the Vatican, at the Gregoriana.

Cardinal Schönborn, the great absentee at the secret meeting?

Is  Vienna's Archbishop keeping his distance from the Franco-German "Illuminati" circle? Or was he  only prevented in the secret meeting because of  a scheduling conflict? It is clear that the Austrian Cardinal was only staying away on Whit Monday in Rome while on an official mission in the Vatican. Whether he or other senior members of the Council of the Synod Secretariat were also participants in the occult meeting subsequently, to exchange information or to make arrangements, is not known.
During the Synod of Bishops in 2014 and following this to Cardinal Schönborn ended with waving flags the camp of Kasperianer to both in terms of discrimination and in terms of homosexuality. During the Synod, the Archbishop of Vienna had exceeded the German Cardinal Walter Kasper far exceeded with a proposal to radicalism. Schoenborn pleaded for the recognition of a general "gradualness" in all the sacraments (see "Subsistit in" transferred to the sacraments - loose "conditions" for Remarried Divorcees Schönborn and "Love is Love" - Cardinal Schönborn's Tribute to Homosexuals and Perverse logic ).
Crudely stated: A "graduality" which makes no place  for evil or negative because the ideal is recognized in the "gradual"  in the one more and the other less. It's the same way, according to Schönborn,  in interpersonal relationships as well, no matter what. In many, the ideal is not fully realized, but in all, at least a little, because they were focused on another human being. The Church did help people striving for the ideal, but in the end are the conditions for the reception of the sacraments (see especially Cardinal Schönborn and the Revolutionizing of Morality ).
Vienna Archbishop December 2014, defenders of the Catholic marriage sacrament in the negative implication toward Russian President Vladimir Putin, in 2015 Cardinal Schönborn has held back with substantive statements on the Synod of Bishops.

Instrumentum Laboris for Prepared for Final Editing- New Methods of Work at the Synod?

In the press release from the General Secretariat for the meeting of the Synod Council, the presence of the Pope was stressed. "Since Holy Father Francis presides,  this  importance is stressed by   his presence,which he attaches to the synodical way." 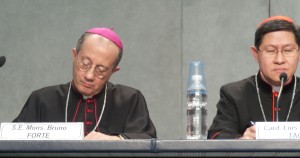 The Kasperians Archbishop Forte and Cardinal Tagle were officially in Rome
On Whit Monday, "the Council examined in detail the project of the Instrumentum laboris ", i.e., the Relatio Synodi, the final report of the Extraordinary Synod of Bishops in October 2014 "supplemented by numerous incorporations by the responses to the Lineamenta were included in received questions by the the Bishops' Conferences and other organizations which apply to them, but also by numerous contributions of different ecclesial realities and of individual believers who were sent to the General Secretariat."  The scrutiny of the text offered the possibility to  "complement and improve its bid."   The "thus revised text corrected by councilors  was entrusted to the General Secretariat for final editing and translation into various languages, and  publication." The publication is to be carried out, according to  the press office of the Holy See,  in "a few weeks".
Finally, Cardinal Lorenzo Baldisseri  "has presented proposals to update the working methods at the forthcoming Annual Synod of Bishopsi". The press release did not describe any  details  for the areas in which the rules of the Synod would be changed. Cardinal Baldisseri and Undersecretary Fabio Fabene were received on the morning of May 26 by Pope Francis at a private audience before the work of the Council was continued.
The XIV. Ordinary Synod of Bishops on the family will be held from 4th-25th October held at the Vatican in 2015.
Text: Giuseppe Nardi
Image: Mil / CR