Bishop Olmsted to Head Congregation for Religious in Rome 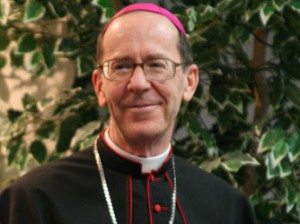 Edit: this decision is already being lamented in certain quarters where it was already reported earlier last week, here, they say he's not going, and here.

(Vatican) The new Secretary of the important Congregation for the Institutes of Consecrated Life and for the Society of Apostolic Life, better known as the Congregation for Religious, will be the American Bishop Thomas James Olmsted of Phoenix in Arizona, USA.  The appointment by Pope Benedict XVI. comes immediately before, as La cigüeña de la torre reported.  Msgr Olmsted has made his name as a Traditional, loyal to Rome and militant Bishop.  The 1947 born ++Olmsted became a priest in 1973 and was named as Bishop Coadjutor of Wichita in 1999 by Pope John Paul II.  From 2001, the Diocesan Bishop of this Diocese was called to Phoenix.

Excommunication of a Nun: no false understanding of "freedom of conscience" concerning abortion

Since 2011 he established that only see males will serve at the altar in the Cathedral of Phoenix.  With that the Bishop discontinued the practice of female servers.  "Not because of any form of misogyny or hyserical clerical sexism, as some in ignorance of Catholic doctrinal teaching carelessly and hastily have charged,"  said the Bishop.  The service of the altar by young boys and lads has deep reaching roots in Church history, still long before there were seminaries providing a modern style of education for the priesthood, just as the Conciliar Fathers of the Council of Trent desired. [We've been saying this for years, here.] The service of the altar was seen as an "apprenticeship" and introductory step to the priesthood, so the Diocese of Phoenix said on the decision of the Bishop.  Bishop Olmsted belongs to those Bishops, who has already celebrated the Roman Rite in its Extraordinary Form [Immemorial Mass of All Ages].

No Female Servers:  The Service of the Altar is for the Church, the First Step into the Priesthood

Bishop Olmsted follows the American, Msgr. Joseph William Tobin to the office of the Secretary of the Congregation for Religious, who according to Rome, Msgr Tobin was dismissed from the Roman Curia, because of his too "soft" line against the rebellious US Women Religious. The Redemptorist (since 1952), who was the General Superior of the Redemptorists from 1997 to 2009, was call to Rome from where he was Archbishop of Indianapolis in Indiana. His activity in the Roman Curia remained a brief interlude.  Then in 2010 he was called to the Congregation of Religious, where he attempted there after the retirement of Cardinal Franc Rode to take a "soft" line in a tug of war with a progressive, feminist and at times drifting into obscure New Age movements, aging part of American Women Religious.  A position, which was not well-received in Rome and led to his dismissal.

The situation that an American will again be called to an important position for Religious affairs after another American, underscores, that for Rome the resolution of the conflict with the rebellious part of the American Women Religious is a priority coming all the way from the top.