(Lisbon) On 15 March Pope Francis appointed a new Bishop of Porto. For the first time in recent days, the diocesan bishop has spoken in the media for the first time. Topics included the celibacy of the priests and the traditional rite.
On September 11, 2017, Bishop Antonio Francisco dos Santos of Porto was stricken unexpectedly at the age of 69 by a heart attack. His death triggered unease in part of the clergy. It was urged to change the Apostolic Nuncio, because he was "not enough of a Bergoglian". Only then should the follow-up question be tackled. This did not happen, but the new bishop sent out signals that could satisfy this part of the clergy.
The new Bishop of Porto is Manuel da Silva Rodrigues Linda. In the Autumn of 2013, Pope Francis appointed him military bishop of the country. Francis has now made him the diocesan bishop of Porto.
The exact date of origin of this diocese is unknown. It is certain that in the 6th century it was consolidated under the rule of the Suevs as a stable institution. During the subsequent Islamic rule, information about the bishops of Porto is missing for approximately 150 years. The diocese is a suffragan of the Archdiocese of Braga.

"That would not shock me"

The Jornal de Noticias has published the first big interview of the new bishop on March 25th. It is from a video interview taken by editors of the same newspaper and also published.
To abolish the celibacy of priests, the bishop said:

"That would not shock me. In the same way as the norm of celibacy has come, it can disappear again. At the beginning of the church the priests were married men."

Bishop Manuel da Silva Rodrigues Linda was also interviewed on the admission of remarried divorced people to the Sacraments. Various Portuguese diocese have already published guidelines on this.
Jornal de Noticias: Will you also prepare a message about the remarried divorced? How will it comply with the Pope's instructions to integrate these situations in your diocese? Will you follow the Bishop of Braga or more to the Cardinal Patriarch of Lisbon?
Bishop Linda: Pope Francis does not provide any solutions, he initiates challenges. And the process is to scan the terrain, as we experienced in the Synod. It should be a way of study. The road from Braga seems very balanced. It is that couples who find themselves in this situation and want to re-enter the fullness of the Church's life should spend at least half a year examining the reasons why they want to do it, supported by technicians [SIC], psychologists, priests, and other married people [scary].
Jornal de Noticias: If a remarried person feels ready to receive the Eucharist, is such a great therapeutic effort necessary?
Bishop Linda: That is it! We are not just talking about a legal level, but also about the depth of conscience.
Jornal de Noticias: But is that not going to be an even bigger stigma for many remarried people, who already feel effectively stigmatized?
Bishop Linda: There are many typologies among the remarried divorced so that we have to clarify each case and analyze how far it is in accordance with the Church.

Repent because "strict groups were given space"

The new bishop was also asked by the newspaper about the "return" of Holy Mass in the traditional rite.
Bishop Linda: I am very worried because in certain cases it ties up the boys and especially the intellectuals. We do not know why these individuals find satisfaction in these rites.
At the same time, Bishop Linda criticized Pope Benedict XVI because in 2007 he opened the traditional form of the Roman Rite home again in the Church.
The bishop said that the video interview did not make it clear whether he meant it ironically, but what to assume:

"Maybe we bishops and priests should repent because we gave room to these strict groups."

The Persecution Continues: An Actual Ban on Confessions for Children and Youth

Always the same:  An anti-Catholic journalist slanders a Catholic priest -- and the cowardly Diocese drives a knife at the same time in the clergyman's back.

(kreuz.net, Neuhoffen an der Ybbs)  Chaplain Andreas Skoblicki "for a start" may not hear any more children and youth confessions.

That was made known in a press release yesterday from the cowardly Dioocese of  Saint Pölten.

Real Old Liberal Grievance will be tolerated for decades

The Diocese reacted lightning quick because of a single slander article in the anti-Catholic Viennese newspaper 'Kurier'.

Fr. Skoblicki was driven from the Parish of Kopfing in the Diocese of Linz in January by the media bosses.

Since Feburary he's been active in the 2,800 population Parish Neuhoffen an der Ybbs for the neo-conservative Pastor Helmut Prader in the Diocese of  Saint Pölten.

The 'Kurier' has disseminated the contention, Fr. Skoblicki is to have "insulted" two eleven-year-olds  in confession.

It consists in frank deceptive defamation.

For that reason the Diocese of St.Pölten went to its press conference in sackcloth and ashes.


Pastor Helmut Prader explained that he is in contact with "all involved" -- therefore with the slanderers .

He is then to clear up the situation and rectify it.

Fr. Skoblicki will, "for starters not hear any more confessions of children and youth", says Fr. Prader.

He will get familiar with the parish and the customs to gain the trust of the area.

Dastardly: The chaplain can not express himself in confession

Chaplain Skoblicki has not commented on these serious accusations.

He may  not openly discuss the contents or circumstances of conversations in confession.

He is sorry, in case he has hurt anyone, and apologizes to them never the less.

That was not his intention.

It possibly depends on the fact that German is not his native language. 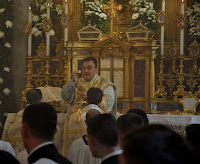 Germany. Today the founder and General Superior of the Institute of Christ the King Sovereign Priest, Abbe Gilles Wach, wanted to celebrate high Mass at the high altar in the Holy Chapel in Altötting. This was according to video portal 'gloria.tv'. The priest requested two weeks previously in writing for permission, but didn't receive an answer. As he discovered by wahttp://www.blogger.com/img/blank.gify of telephone, a secretary explained to him that he may not celebrate Mass there. The Old Liberal Rector of Altötting, Msgr Gunther Mandle, is a known enemy of the Immemorial. Despite this, two priests of Vaduz were able to say the Immemorial there two weeks ago in the early morning on the side altar.